On Top of the (Wine) World: ICE Alum Aaron Fusco on His Path to Daniel

On a recent Thursday, I had a late morning phone chat with Aaron Fusco (Culinary Arts ’10), sommelier at Daniel. At 31 years old, he’s relatively young to be holding a top rank in the wine program of one of New York City’s most eminent restaurants. Just a couple minutes into our conversation, however, his affable yet polished nature came through. Together with Aaron’s passion for fine dining, it makes sense that he should be managing the expectations of (and schmoozing with) some of the most demanding customers in the industry. 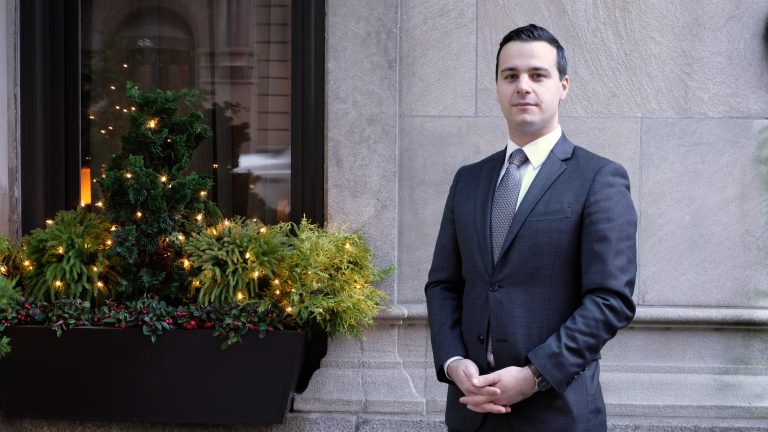 Aaron was kind enough to offer us a sneak peak into a day in the life of a sommelier at Daniel, and to answer some hard-hitting wine questions, like whether the best sparklers come from France and if screw-top wines really merit their bad rap.

Was food a big part of your family life growing up?

Somewhat. My grandma was a really good cook and we all really enjoyed dinners at her house, though I wasn’t involved in the cooking very much. It wasn’t until after college, when I had time to focus on other things, that I realized I loved cooking. I just enjoyed it — the productivity and the tactile experience of cooking. I started watching Jacques Pepin programs and it went from there.

What did you do before ICE?

I studied economics at McGill University. Then I took a year in between graduating and starting the program.

That’s quite a change, economics to culinary arts.

I was spending summers working in a law firm, getting a feel for the 9-5 corporate life. That was motivation to do something a bit more fulfilling.

Tell me about your decision to enroll at ICE.

I was doing a lot of cooking at home and I wanted to make a transition into the industry. I considered other schools but I thought it would be crazy to enroll in a two-year program. Then I started looking at ICE and a couple other schools and decided on ICE. The main difference was the externship — I thought the externship was a better way to get good experience.

Were there any instructors or modules at ICE that stood out to you?

Yes. Chef Chris Gesualdi was by far the strongest teacher that I had. He had the real experience in terms of working in the best New York restaurants and was very interested in studying advanced techniques. This was a period when molecular gastronomy was a little more en vogue than it is now. I did a lot of recipe testing and extra-curricular work with Chef Chris, which was great.

Was that your first exposure to modern gastronomy and fine dining?

Absolutely. I was very naïve when I started the program. I didn’t know too much about the New York restaurant scene or the leading chefs outside of the celebrity chefs. Chef Chris helped open my eyes to Alinea and WD~50, which were the big places at the time. He was someone who had been in the industry so long but was still invigorated by what was around him.

How did training as a chef translate into working in wine?

I did my externship at Picholine, which was a two-Michelin star restaurant at the time. I continued to work with the chef after my externship and followed him to a couple of different restaurants. After about 15 months, I decided to make the transition to front of house. From there, it took another two years until I discovered wine and really got into it at Daniel.

What was your first job at Daniel?

I began in July 2012 as a busboy and within a year I was promoted to assistant captain. That’s when I started getting into wine. I was working for just under two years before I became a part-time sommelier.

Going from the kitchen to front of house as a busboy is a substantial change. Did you know you wanted to eventually be a sommelier when you began?

I first worked at Tocqueville — they helped me make the transition from back of house to front of house. I spent 9 months there, getting the hang of things, and then I made my way to Daniel. I had the mindset of I want to work in the best place possible. I figured that the learning curve would be higher.

What’s a day in the life like as a sommelier at Daniel?

I arrive at work at 3pm. I say hi to the management team and let them know I’m there. Then I do a little bit of set up in the dining room. I go downstairs to the wine cellar, say hello to my boss, take a look at the reservations for the evening and make a game plan for service itself. Then we usually have a handful of deliveries to put away — wines that need to be checked in and sorted in the wine cellar.

Some evenings, we put some wines aside for private events and do restocking. Then we have lunch, a meeting and service. Service entails speaking with guests, opening bottles and keeping an eye on the tables I’m responsible for. At the end of the evening there’s usually restocking to do in the large cellar and smaller fridges upstairs; I say “smaller,” but there’s still a couple thousand bottles. That’s pretty much it. It’s really focused on service — there’s not as many behind-the-scenes tasks. The majority of work outside of the cellar is interacting with clients.

Now for a few wine and industry questions: It seems like the wine industry is changing in that people are having more fun with wine — taking it less seriously. What are your thoughts?

I totally support the idea of wine drinking becoming more casual. I enjoy wines that have a cerebral element to them, but that’s not to say that every glass of wine you drink should be analyzed to death. It’s a visceral and emotional experience, and if you want to dive deeper that can be fun and compelling. But at its surface, wine should just be enjoyed.

What’s your process for learning wines?

When I started, Raj Vaidya, the gentleman who runs Daniel’s wine program, encouraged me to take an autodidactic approach to wine. He told me, Anything you don’t know, go home and look up, and if you still don’t understand, then come ask me. If you do research on your own, it sinks into your brain a lot more than when you’re told something. So that’s what I did.

The tasting side is taken care of at work. We have a policy that when we open a bottle, we pour a half-ounce for ourselves, to analyze the wine and make sure it’s in good condition for the guest. In a given night, I taste upward of 30 wines. Then I have a large stack of books and do a lot of reading.

You’re on a date and want to impress someone — what region and year is your go-to?

It really depends on a person’s taste. It’s hard to have an overarching standard. Still, I’d say Champagne is the best way to impress somebody. There are few people who dislike Champagne. I’d recommend getting away from the Roederer, the Krug and the Moët and find a nice grower-producer of Champagne. Then you can talk about how you’re drinking a wine made by a producer family in a small town.

What about a funky sparkling wine from a lesser-known region?

Those are fun, but not always the most refined. I tend toward something refined, smooth and approachable. I’m less interested in rustic wines with sharper edges.

So you’re saying that Champagne makes the best sparkling wine?

Hands-down, absolutely (laughs.) Well, I would say the most complex. If you’re looking for complexity and wines driven by terroir, then Champagne is the answer.

What about screw-tops? Are those always inferior wines?

I don’t have a ton of experience with screw tops. But you’re placing wine in a 100% anaerobic environment, which overtime could put “reductive taints,” as they call them, into the wine by not allowing for any passage of oxygen into the bottle like a cork would allow. I think for aging wines, it’s not a good thing. But for young, fresh wines, there’s nothing wrong with screw top. Plus, you can get to the wine easier.