Prosecco is More Complex Than You Think

Champagne and Prosecco are undoubtedly the two most popular, iconic, and widely recognized sparkling wines in the world. Prosecco can often be seen as an imitation to Champagne, but they are actually very different wines with different public images. While Champagne is seen as a luxury and expensive, Prosecco is perceived as casual and inexpensive. While 307 million bottles of Champagne were sold in 2017, Prosecco had a staggering 510 million bottles sold, proving the rising popularity of Prosecco among consumers.

This month, Alan Tardi, award-winning wine author, joined us for an enlightening discussion comparing Champagne and Prosecco. He taught us about the obvious differences, while focusing on the many fundamental aspects the two wines have in common. Prosecco is commonly perceived as Champagne’s imitation, but they are actually very different wines. Fundamentally, they have different grape varieties, growing areas, and even production methods. Through the tasting, we understood what makes Champagne and Prosecco unique wine categories, while also showcasing the commonalities that they share. Read below to find out more about the similarities and differences of two of the most famous sparkling wines! 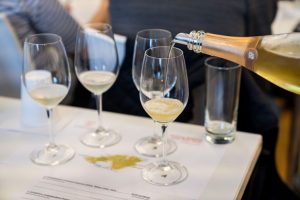 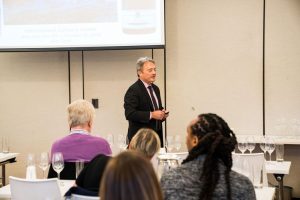 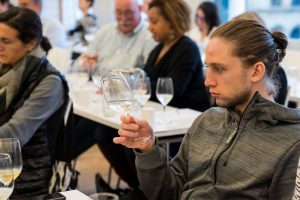 While Champagne and Prosecco achieved their fame and notoriety as sparkling wines, both originated as still wines when they were invented hundreds of years ago. There are many wines in the world that are direct imitations of Champagne, like Cava, Cremant and Franciacorta, but it is important to know that Prosecco developed along its own separate parallel path to become its own distinct wine.

The growing areas of both regions are highly diversified and complex, with major distinctions between each part. But, that is where the similarities seem to end! There is only one Champagne appellation, but there are three for Prosecco. These appellations include Colli Asolani DOCG, Prosecco Conegliano Valdobbiadene DOCG, and Prosecco DOC.

TRANSITION FROM SWEET TO BRUT 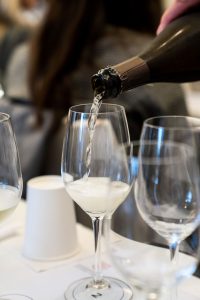 Both Champagne and Prosecco began as sweet wines, and they both made their major US debut inside of a cocktail. Champagne Cocktail and Champagne Punch was introduced during the first half of the 19th century, while Prosecco via the Bellini was introduced in the 1970s. Even though Prosecco was introduced and is known as a brunch-y drink, there are many different styles of Prosecco. These styles include sweet, bone-dry, sparkling, still, and unfiltered, and can all be used and enjoyed in different ways.