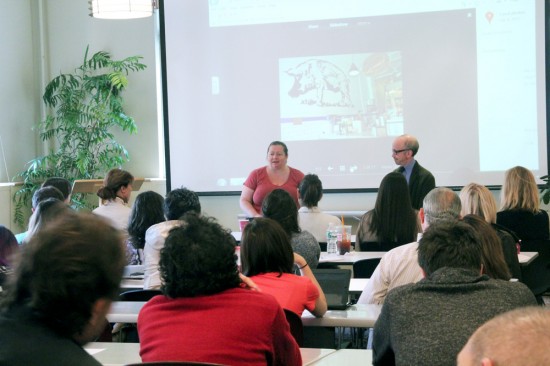 Once a successful chef in the city's top kitchens, Jenkins described the expected and unexpected aspects of her transition into an entrepreneurial role. For example, she no longer spends much time in the kitchen. That doesn't mean she isn't at her restaurants, however. Often, she's just steps from the dining room, filling purchasing orders, adjusting staff schedules or curating Porsena's wine list.

When it comes to fulfilling her creative side, Jenkins notes this latter role as a recent task she particularly enjoys. Having grown up in Italy, she intuitively knows quite a bit about wine, but the process of selecting bottles for Porsena and Extra Bar's menu has allowed her to learn about wine on a completely different level.

Creating new menu items has also become an outlet for the chef, who especially loves the abundance of produce at the nearby Union Square Greenmarket during warmer months. Among the many lessons Jenkins has learned at Porsena, she notes the greenmarket's influence on her decision to include dishes on the standard menu or list them as a special. If an ingredient risks to be fleeting, no matter how much she likes the dish, it has to remain a special. As for whether or not to include a simple plate of pasta with tomato sauce on her menu, Jenkin credits becoming a mother with her appreciation of this classic dish, which now holds a spot among the primi piatti at Porsena.

Among the chef's more practical advice? Learn something about plumbing, electricity and air conditioning systems. In addition, to be fully effective as an owner, Jenkins has learned that she needs to complement her kitchen abilities with a knowledge of the intricacies of the front of the house. While she initially felt intimidated by FOH responsibilities, she now finds that her customers appreciate the nights where she mans the floor, even if that reveals she's not the one cooking.

On the subject of customers, Jenkins stressed the importance of building a regular customer base. Having been lucky enough to receive steady press coverage for the opening of her second restaurant, Porsena, she now finds that as the buzz dies down, she's rebuilding her business model for longer-term success. Among her strategies is the inclusion of “cravable” items on the menu, rather than relying on intellectual or technical dishes that impress, but don't keep customers coming back for more. Chef Jenkins also emphasized “knowing your numbers”, monitoring check averages and customer counts, and adapting your business model as necessary.

Approachable, honest, and transparent, Chef Jenkins is a great example for ICE students of hard work, smarts and creativity combining to pay off in a very competitive marketplace.