With Cúrate landing on Forbes Travel Guide‘s list of “8 Secret Dishes We’re Only Telling You About” for its panuelo de chocolate dessert, we thought it would be fitting to boast about ICC graduate Liz Button, owner of the acclaimed tapas bar.

Click here to see the full article in Forbes. 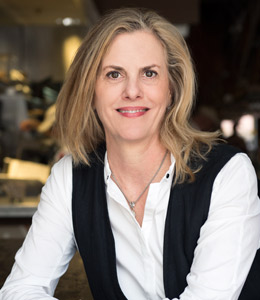 In 2007, Liz Button was running a charter aviation company in New Jersey and her daughter Katie was headed to Sweden to complete a Ph.D. in Chemistry. Today, they are the proud owners of one of North Carolina’s hottest restaurants, Cúrate Bar de Tapas in Asheville.

At first, their shared love of food took them on different paths. Katie, disenchanted by academia, accepted a front of house position at José Andrés’ Café Atlántico/MiniBar in Washington DC, while Liz pursued her lifelong dream of opening a restaurant by enrolling at ICC. She decided on the Restaurant Management Course because “I wanted to feel confident knowing the ins and outs of the business.” The class was so rewarding she decided to pursue a culinary degree as well. Still impressed by the overall instruction, the culinary technology was most memorable. “I was blown away at the innovation.”

Katie, it seems, was also blown away. At Café Atlántico, not only did she discover a passion for restaurants, she met her future husband, veteran manager, Félix Meana. A native of Roses, Spain — home to Ferran Adrià’s famed elBulli — Félix worked at the legendary restaurant for five years prior to joining Café Atlántico. Before long the couple returned to elBulli, where Katie completed a highly coveted seven-month stage in the kitchen.

It soon became obvious — Liz’s dream restaurant would be a family affair specializing in authentic Spanish cuisine. In 2011, Cúrate opened to raves and as The New York Times wrote last month, “it’s popularity continues to grow.” When reflecting on her success, Liz credits the wisdom of age, her natural stamina and drive, and a good business plan. “I followed the Restaurant Management business plan to a ‘T’ and it was the foundation for Cúrate … When we shopped it around to the banks — and we had to see all of them because no one was lending back then — they
all said ‘Wow, I’ve never seen a business plan like this. This is impressive.’”

Indeed it is. This month Katie and Félix were awarded the 2013 Rising Chefs Award for Sustainablity from StarChefs.com and the family has plans to open a nightclub with a Spanish take on American bar food in downtown Asheville. Continued success!

Liz Button graduated from the International Culinary Center (ICC), founded as The French Culinary Institute (FCI). In 2020, ICE and ICC came together on one strong and dynamic national platform at ICE's campuses in New York City and Los Angeles. ICC’s culinary education legacy lives on at ICE, where you can explore your own future in food.