Our farm manager has a seriously green thumb.

Caleb Raff’s unconventional path to plants includes a bachelor’s degree in English literature and a handful of restaurant gigs. His passion for food, knack for hands-on work and interest in sustainability led him to urban farming. Now, he acts as ICE’s hydroponic farm manager, where he innovates with greenery on a daily basis.

“I’ve always been interested in plants,” Caleb reveals. “I gardened a lot as a kid. My grandmother and my mother are big influences on my life and they’re both very accomplished gardeners. I kind of forgot about it when I went off to college.”

While Caleb studied English literature, classics and history at George Washington University, he worked as a server. He was already comfortable in a restaurant atmosphere, having held prep cook jobs in his hometown of Providence, Rhode Island during high school. So when he graduated from college, it was only natural that Caleb continued on this food industry trajectory at Farmers Restaurant Group in D.C.

After about a year, Caleb moved to New York and secured a farm hand role at Farm.One, a Tribeca-based vertical farm that grows rare, high-quality produce specifically for chefs. The company’s small, startup nature allowed Caleb to quickly advance to shift manager and then plant scientist. Eventually, he was in charge of research and development for new crops and growing processes. “It was not really what my background was, but I was able to be very successful at it,” he admits.

Though Caleb was mostly self-taught, he launched a career as a freelance hydroponicist after just two years at Farm.One. He now works with a variety of clients throughout the city to design hydroponic farms and develop “growing recipes,” which are the correct conditions for given crops to thrive. At Teens for Food Justice, a nonprofit that builds farms in schools, Caleb helps upgrade equipment systems and plans the curriculum. 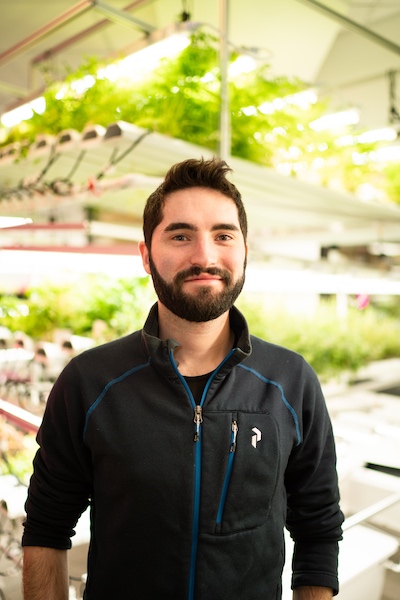 In 2019, Caleb added a part-time position as ICE’s hydroponic farm manager to his repertoire. At our New York campus, he heads the program to grow dozens of varieties of plants for students to cook with and learn about in class. He does this using a controlled, indoor environment and hydroponics, the method of growing plants in a solution of nutrients and water without any soil. Caleb brings a breadth of expertise to the post. “I don’t have a traditional educational background in this, but I have a pretty wide wealth of experience to draw from, which helps me be able to teach and run the farm,” he explains.

Caleb’s connection to food is part of what makes him a great fit for ICE. As a prolific home cook and a former restaurant employee, he has a deep appreciation for fresh ingredients and a curiosity about new flavors. “It’s good to be able to talk to the instructors and have that shared experience of working in restaurants and being able to relate to students who are doing externships,” Caleb reflects. “It’s been super helpful.”

Pursue a career in plant-based cooking at ICE.

A normal day for Caleb starts with an equipment inspection. He ensures that all the LED lights are on and that the water is flowing through the pumps. He also examines the floor for leaks. “That’s really a critical thing because there is some delicate equipment in here and things can go wrong, things can get clogged up, so I always check that when I come in,” Caleb says.

Next, he’ll spend a couple of hours performing a process called “testing and dosing,” which means that he monitors the reservoirs, nutrient solution, and pH levels of the water. Liquid that is too basic or too acidic could be harmful to the plants. After that, he usually sows some new seeds.

Often, Caleb gets to interact with students. Classes visit the farm at least once per module for his lessons on hydroponics, flavor profiles, proper harvesting techniques and more. Caleb walks groups through planting seeds and transplanting those same seedlings weeks later. He also conducts produce tastings. “The idea is to give students a better understanding of where the food they’re using in their classes is coming from and what it takes to cultivate it,” he describes. Caleb also encourages students to volunteer in the farm during their spare time.

Whenever Caleb isn’t inspecting equipment, testing and dosing, or teaching, he’s pruning. “Any time I have leftover will be mainly given to pruning,” he says. “One advantage of the indoor environment and the hydroponics is that things grow very quickly. If we let things overgrow, it’ll get to be a little bit of a jungle in here. We want it to look nice, so I’ll spend a good hour or two every day making sure the plants are contained and healthy.”

Caleb also cleans the systems, researches new crops and communicates with instructors to guarantee the farm is providing what they need. “There is no shortage of things to do and it changes from day to day,” he says. 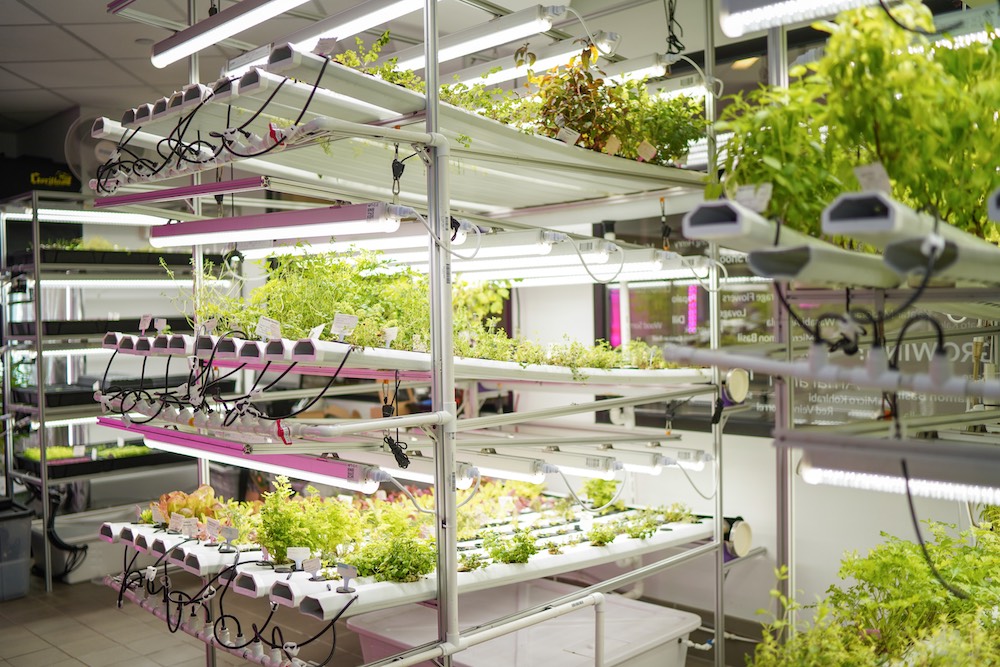 Perhaps the most impressive aspect of Caleb’s work in the farm is the innovation. “A vast majority of the things that we're growing here just haven’t really been grown hydroponically before,” he explains. “We’re growing herbs that traditionally would be grown in soil outdoors and no one's tried to see if they work in hydroponics before.”

Summer savory is one of Caleb’s experimental crops. “It’s an herb that’s really common in French cuisine,” he expounds. “It’s really hard to find in the U.S., grown in soil or otherwise, and we’re able to produce it here so students can get a sense of what it tastes like and how it is when it’s really fresh. Being able to grow things that haven’t been grown in the city or haven’t been grown in this particular context is probably the biggest accomplishment for me.”

Caleb’s main goal for the future is more operational. He wants to streamline the labor-intensive process of running the farm. On the administrative side, he’s developing spreadsheets to make management more efficient. For the hardware, he’s brainstorming solutions for leak-proofing and minimizing maintenance. “I’d also love to teach a few more classes here at the school,” Caleb muses. “If we’re able to fit it in with the rest of the curriculum, it’s a really valuable resource for students to have.”

Get the farm-to-classroom experience in ICE's career training programs.