Hot Cross Buns: What Are These Damned Things?

I have a vivid memory of a bun-related conversation with my grandmother. As she walked me home from day camp, I remarked that I wanted a bun in my hair. (I never had long hair; my mother thought a pixie haircut was “just so cute!” Naturally, long hair was all I ever longed for. That and braces.) My grandmother’s retort: “You want a bun from the bakery in your hair?” Perhaps that’s when my fascination for buns, rolls and all other warm, yeasty and sometimes sweet delights began.

Springtime rolls around and out come trays of hot cross buns, adorning the display windows of European bakeries. An obsession with their soft tender crumb, fragrant spices and candied orange rind, and the strangely satisfying chewy texture of the doughy cross, is a cross I have to bear.

I try to sample as many as possible — sometimes suddenly stopping my car to park when I come across a new bakery, just to compare them to the many dozens of buns I’ve enjoyed since childhood. I’ve tasted them while traveling throughout the south of England (on a tour of cathedrals, no less); I’ve sampled their Italian and Austrian counterparts on Good Friday in Florence and Vienna; and I’ve had countless rolls made by the plump-fingered Polish ladies whose bakeries I frequented while growing up on Chicago’s north side.

Yet all of that abruptly came to a stop a few years ago, thanks to our dean of bread baking, Sim Cass. His recipe for hot cross buns is the absolute best I’ve ever tried. It is downright perfect, easy to execute and traditional in its roots — my kind of recipe. I’ve tweaked it ever so slightly, so I hope Chef Sim doesn’t damn me forevermore… keep reading, I’ll explain.

A few fun facts about these underappreciated buns:

Some people believe they can ward off evil spirits. The cross is said to symbolize holiness; but, delicious as they are, I have no faith that these tasty little baked goods will save us from any harm.

The darned things have been damned! These delectable sweets, with origins tracing back to ancient Greece, were recently banned in England from being served in schools, hospitals and other public institutions, as a means to prevent public endorsements of any one religion.

Icing evolution. Traditionally, the cross decorating the buns was made from a simple paste of flour and water. Over time the cross has changed and some bakers mark their buns with a sweet frosting called fondant, which is similar to the icing used to top a cinnamon roll.

Let’s break bread, shall we? Just as the saying goes, hot cross buns are quite commonly given as gifts during Easter, as a symbol of friendship and kindness. So regardless of your religious beliefs, you can gladly accept and enjoy them if you so choose. Just turn them 90 degrees and you'll have an X instead of a cross — X marks the delicious spot. 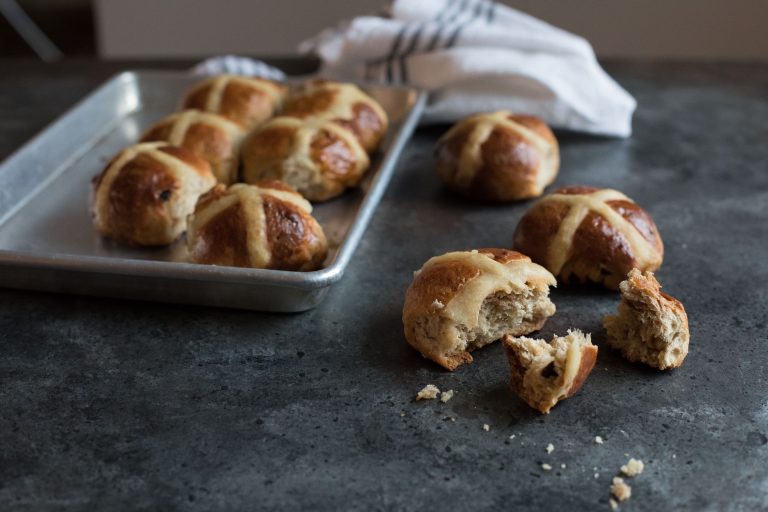 Learn to bake buns (and more!) like a pro with Chef Jenny — click here for information on ICE’s career programs.