What it's like to Extern in the Saveur Test Kitchen

Two 2019 grads take us behind the scenes of their externships in editorial recipe testing at a New York City media outlet.

Enrolling in culinary school appeals to a range of food lovers, and cooking in a restaurant isn’t the only path after earning a diploma. Food media, particularly test kitchens, are run by talented, creative and well-trained cooks eager to reinvent the Thanksgiving meal on an annual basis, while simultaneously testing a dozen dessert recipes with micro-tweaks. We spoke with two ICE alumni who recently wrapped up externships at Saveur’s test kitchen on their experiences dipping into the food media world.

Vicki Paradise (Culinary, 19) enrolled in ICE’s Culinary Arts program with the goal of becoming a head chef at a restaurant she'd own someday in the elusive future. But throughout the program, her goals changed.

“I started to learn what paths I did not want to go down,” Vicki recalls. She loved cooking but narrowed her career choices down based on anticipated stress and pace. “I preferred a route where I would be able to express my creativity through the food I was preparing, rather than just push plates out,” she says of her decision to pursue an externship in a test kitchen. She earned a placement at Saveur in May and immediately loved the creativity involved in plating and photographing new recipes.

Previously, she’d only worked at restaurants, high-end, big name spots like Michael White’s Marea and Missy Robbins’ Misi, the type of place she’d once dreamed of calling her own. 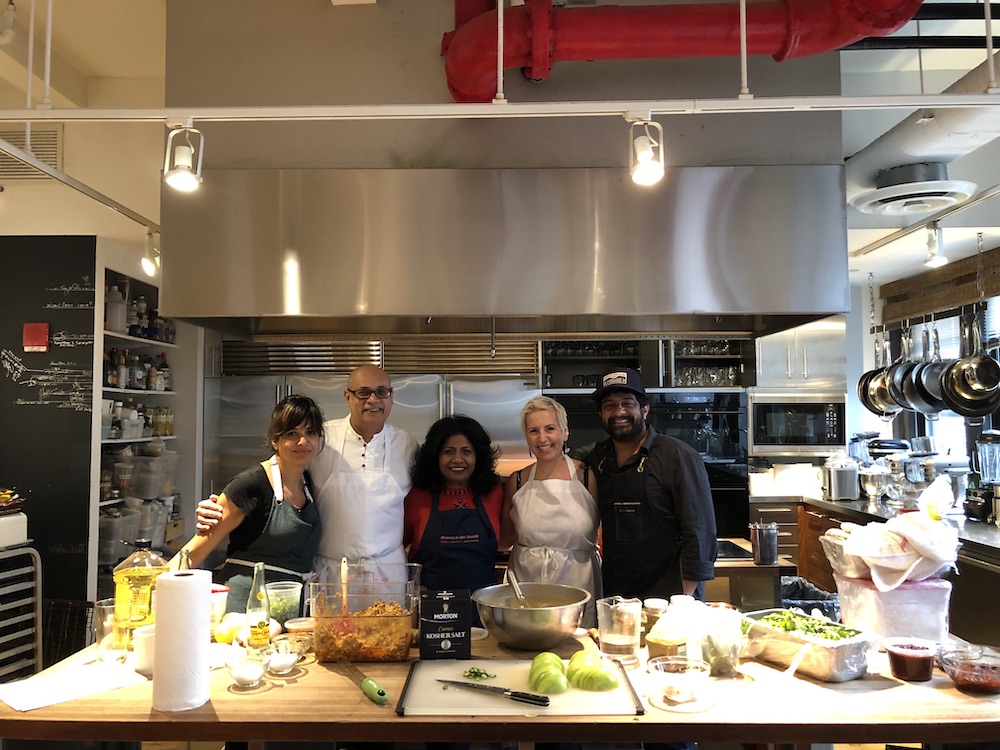 “The atmosphere and experience was totally different between a fast-paced restaurant kitchen environment and a much more subdued yet still busy test kitchen,” Vicki says. “Although both environments are structured, they are controlled in a different fashion. In a test kitchen it is quite the opposite. We know our deadlines and what has to get done by either end of day or for a particular photo shoot.” Another difference: the quiet and serenity of the Saveur kitchen in the back of the magazine’s editorial offices in Manhattan’s Koreatown. The job allowed Vicki to relax, concentrate and be patient while working independently under the supervision of a test kitchen manager.

Working in a test kitchen is not always the antidote to restaurant life, though. Grayson Kelly (Culinary, '19) enrolled at ICE after studying English as an undergrad. He knew he was equally passionate about cooking and writing, and ICE’s connections to New York’s media scene were a big draw. Previously, he’d only worked as a prep cook, and at Saveur, he learned the difference between being a chef and recipe developer.

I’m in print! Make sure to pick up a copy of @saveurmag’s summer issue on newsstands now! MAJOR congrats to @katcontrol and @stacy_adimando on this beautiful new issue, and I’m so thankful that I could be a little part of it.

“Being a restaurant chef, you're so in the moment. You throw a pinch of salt here, you throw a dash of pepper there — whatever feels right and whatever tastes good. The proof that you've done your job is that it tastes good and doesn't get sent back to the kitchen. As a trained chef, it's something that feels natural and instinctive,” he says. “In a test kitchen, everything is methodical. It's completely different than working in a restaurant in the way that everything needs to be measured and weighed in both the metric and imperial units. A four-finger pinch of kosher salt that you'd naturally throw into a braise just for taste needs to be documented and weighed on a micro scale. It can feel extremely restricting at times.”

Still, the flexibility and lack of a typical day-to-day routine in the test kitchen are appealing. Work hours could be filled with guest chefs demoing their signature dishes or techniques, or editors arranging and collaborating on photo shoots with food stylists, props and photographers.

Each morning typically starts with cooks prepping their stations and meeting with the test kitchen manager, who explains daily tasks, deadlines and all the recipes on deck. While the kitchen is well-stocked, a shopping list for extra ingredients usually surfaces, and externs will shop at local stores or call in specialty ingredients from a butcher or preferred vendor.

Once ingredients are prepped and measured, the test kitchen manager makes sure the mise en place is good to go, and then recipes can be prepped. “We only prepped one recipe at a time to completion, unless it was possible to start another recipe while one was cooking in the oven over a long period of time,” Vicki explains. Notes on the recipes and timing, cooking and temperatures are essential. Selecting appropriate plates, bowls, silverware, napkins and boards for photo is part of the development, which concludes with plating and photographing before the Saveur team tastes the final product. Not every recipe is successful, but that’s part of the job.

“An unexpected challenge for me was getting accustomed to doing a lot of math, as we needed to mise out all recipes with three or four different types of measurements,” Vicki says. Saveur’s international subscriptions mean recipes are recorded in grams, ounces, quantity and pounds. Sometimes chef’s recipes are tweaked as well, which also requires math. “There is a science to all of it,” Vicki says.

All the extra work — the weighing, measuring and documenting — is rewarding, Grayson says, “because it feels good to know that we're working on recipes that will help people who aren't professionally trained chefs make good food. Isn't that the goal of being a chef — to make it easier for everyone to feed themselves and their families well?”

Working in a test kitchen straddles a gap between being a “restaurant person” and “media person” as Grayson puts it, but the experience revealed more cooking-related opportunities to both ICE grads. Now Vicki is more interested in catering, freelancing recipe writing and development as well as private chef work. The diversity of projects she worked on at Saveur also renewed her interest in pastry. Most importantly, she learned that she works well independently with minimal supervision, empowering her to feel capable of running her own business.

The challenging nature of the work, which involved developing new ideas while also riffing off former popular recipes to freshen the content up, also emboldened Grayson to dream big. “I want to be the next Martha Stewart or Rachael Ray,” he says. “I want to write stories that make people laugh and feel less alone and appreciate the art of cooking and food like Anthony Bourdain did.”

Embark on your own culinary career path with a diploma from ICE.