It's said that those who can't, teach. But when it comes to cooking, Spice Market's Executive Chef Anthony Ricco is a master at both. 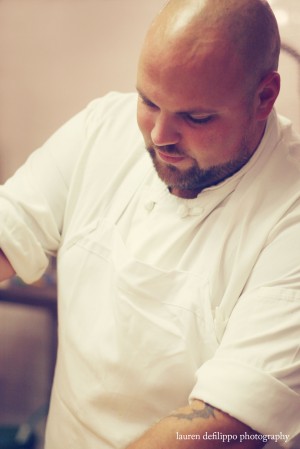 Before enrolling in ICE's Culinary Arts program, Ricco was working as a prep cook at the China Grill. He says, "My brother forced me to go to ICE because I was holding on to the brochure for almost a year, and he knew I had talent in the kitchen, but I was wasting it. ICE helped me find my culinary voice by giving me access to quality product and excellent teachers who are very talented chefs."

After graduation, Ricco worked at a restaurant in Long Island City, then found a position at Jean Georges, where he spent three years working every station in the kitchen. Then, he received an offer to work at one of Jean-George Vongerichten's other New York restaurants, Spice Market. 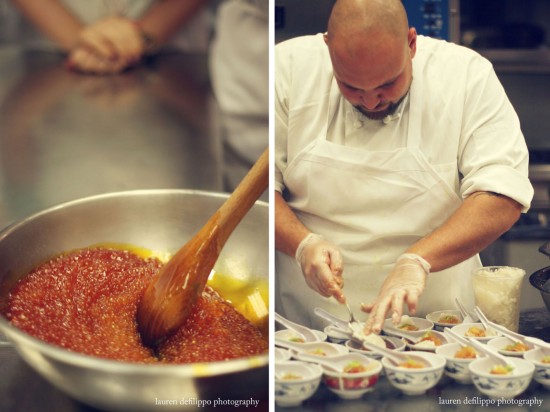 When considering whether or not to take the position, Ricco recalls being motivated by one detail—or rather, one dish: tuna ribbons with chili tapioca,Asian pear, and lime in a chilled lime-coconut broth. This week, fifteen lucky students had the chance to relive Ricco's sense of culinary discovery, in his "Light Asian Flavors" class at ICE.

It wasn't Chef Anthony's first time teaching at ICE. This past winter, I was one of a handful of students who he taught to prepare the "Signature Dishes of Spice Market." Despite the complexity of the restaurant's recipes, it was clear that there were intensely flavorful components that I could recreate at home. From the restaurant's signature chili oil to a spicy, tangy ginger vinaigrette or a crunchy garnish of garlic chips, each element was a clear and accessible entry into the processes by which professionals layer flavor to create a winning dish.

Needless to say, when I showed up for my second class with Chef Anthony, it was no surprise to see that I wasn't his only repeat student. This time, I was charged with making white pepper ice cream and a spiced passion fruit simple syrup. Being more of a savory cook, it was a challenge outside my comfort zone, but involved techniques that I was eager to learn.

In fact, that's where Chef Anthony's strength lies. He understands that the flavors and culinary style he works with every day are foreign to most American home cooks, and makes sure that every student, no matter what recipe they are personally assigned, has the chance to learn the techniques behind the various elements of each dish. That's how I ended up not only making ice cream and simple syrup, but also breaking down a chicken and a red snapper (both for the first time).

And of course, given that he manages a staff of more than sixty at Spice Market, it was no surprise that Chef Anthony was able to supervise and motivate our motley crew of amateur cooks to churn out such advanced dishes. After four hours of cooking, that was the ultimate reward: to be transported by pungent, spicy, sweet flavors to the far reaches of Asia—or at least, Spice Market, which is a destination in itself.