You may know ICC Pastry Arts alumna Christina Tosi as one of the newest judges on Fox’s MasterChef and MasterChef Juniors, but this rising star has been making waves in the culinary industry since graduating from the International Culinary Center in 2004.

When restaurateur (and fellow ICC alumnus) David Chang hired Tosi to write the food safety plan for his restaurant Momofuku, Tosi impressed Chang so much that he ended up hiring her as his pastry chef. At the time, there were no desserts on the Momofuku menu — something Tosi would soon address by founding Momofuku Milk Bar in 2008.

Named “one of the most exciting bakeries in the country” by Bon Appétit magazine, Milk Bar is the sister bakery to the Momofuku restaurant group and provides baked goods for six retail locations (with another opening soon) as well as other restaurants in the Momofuku group. As the founder of Momofuku’s dessert program, Tosi helped Momofuku Ko earn two stars from the Michelin Guide and Momofuku Ssäm break into Restaurant Magazine’s list of the top 100 restaurants in the world.

In 2012, Tosi received the James Beard Rising Star Chef award, and she was a finalist for the James Beard Outstanding Pastry Chef award in 2014 — an award she went on to win in 2015. In addition to being an award-winning professional chef and television personality, Tosi is also a published cookbook author. Her first book, Momofuku Milk Bar, was met with widespread praise and paved the way for her second book, Milk Bar Life.

Tosi and Milk Bar have been featured on television shows and in publications around the world, including The Today Show, Late Night with Jimmy Fallon, Good Morning America, Conan, The New York Times, Vogue, Wall Street Journal and Forbes.

“Every day I cook in my restaurants, I’m using techniques that I learned at ICC. Every day. And I always will for the rest of my life.” – Bobby Flay 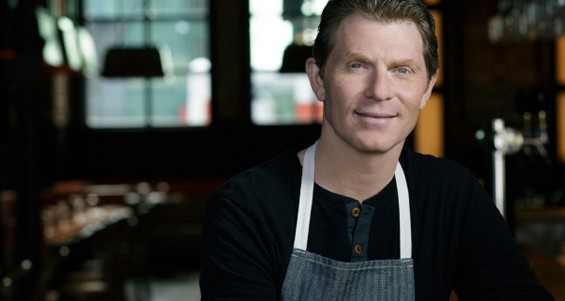 Celebrity chef and serial restaurateur Bobby Flay graduated from ICC’s very first class in 1984. Since then, Flay has gone on to open multiple restaurants (including Mesa Grill, Bar Americain, Bobby Flay Steak, Gato and Bobby’s Burger Palace) and appear on countless cooking programs and specials on Food Network and Cooking Channel, including:

Flay has won three Emmys for his shows Boy Meets Grill, Grill It! With Bobby Flay and Bobby Flay’s Barbecue Addiction. In June 2105, Flay became the first chef to earn a star on the Hollywood Walk of Fame.

“One of the biggest pros that the International Culinary Center has is its network of alumni and restaurants.” – David Chang

Restaurateur and innovator David Chang is perhaps best known as the founder of the Momofuku restaurant group, which includes the NYC-based Momofuku Noodle Bar, Momofuku Ssäm Bar, Momofuku Ko, Momofuku Milk Bar and Má Pêche, as well as restaurants in Australia and Canada.

Since graduation from ICC’s Culinary Arts program in 2001, Chang has won multiple awards and accolades, including maintaining 2 Michelin Stars for Momofuku Ko:

ICC Culinary Arts graduate Dan Barber has always been an advocate for sustainable agriculture and the connection between farm and table. His writings on food sustainability, agricultural policy and the farm-to-table movement have been featured in The New York Times, Food & Wine and Saveur, among other publications. Appointed to the President’s Council on Fitness, Sports & Nutrition by President Barack Obama, Barber has worked tirelessly to raise awareness about the effects of everyday food choices.

In 2002, Barber was named one of the “Best New Chefs” by Food & Wine magazine. He also received the James Beard Best New Chef: New York City award in 2006 and the Outstanding Chef award in 2009. Time Magazine named Barber as one of the world’s most influential people in the Time 100 in 2009.

Barber went on to partner with International Culinary Center to create the Farm-To-Table extension of their Professional Culinary Arts program. ICC’s Professional Culinary Arts + Farm-To-Table program builds upon students’ foundational chef training by connecting it to the beginning of the food chain. By exploring how food is grown, raised, packaged and distributed, students gain a better understanding of how quality ingredients make it to the kitchen and are equipped to make informed choices for their own dishes.

A loyal ICC alumnus, Barber also likes to hire ICC graduates for his own food businesses.

The road to success begins with a first-rate education from a world-class culinary school.

These chefs graduated from the International Culinary Center (ICC), founded as The French Culinary Institute (FCI). In 2020, ICE and ICC came together on one strong and dynamic national platform at ICE's campuses in New York City and Los Angeles. ICC’s culinary education legacy lives on at ICE, where you can explore your own future in food.