Understanding Wine: How I Learned to Stop Hating and Love the Riesling

ICE and USHG have paired up to offer Understanding Wine: a unique wine course led by James Beard Award-winning Wine Director and Master Sommelier, John Ragan. The course is based on the same insider educational curriculum taught to all USHG sommeliers, and ICE’s Content Manager Caitlin Raux had the chance to tag along on this 10-part voyage into the world of wine.

“Convictions are more dangerous enemies of truth than lies.” It’s a quote from Friedrich Nietzsche and not exactly what you'd expect to hear from a sommelier trying to sell you on Riesling. But when that sommelier is Paul Grieco, described by the New York Times as the “high priest of the American Riesling revival,” you can bet your Bordeaux you’ll start questioning your own convictions — especially if you’re still a non-believer in Riesling.

Paul, a sommelier at the TriBeca winebar, Terroir, was the guest presenter at Week 6 of Understanding Wine, a 10-part series of wine classes led by USHG Wine Director and Master Sommelier John Ragan. Sporting a mechanic’s shirt and a long goatee, Paul’s wine preferences seem as irreverent as his fashion choices, but spend some time soaking in his Riesling gospel, and you just might become a believer, too. I myself started to see the light by the end of the evening. 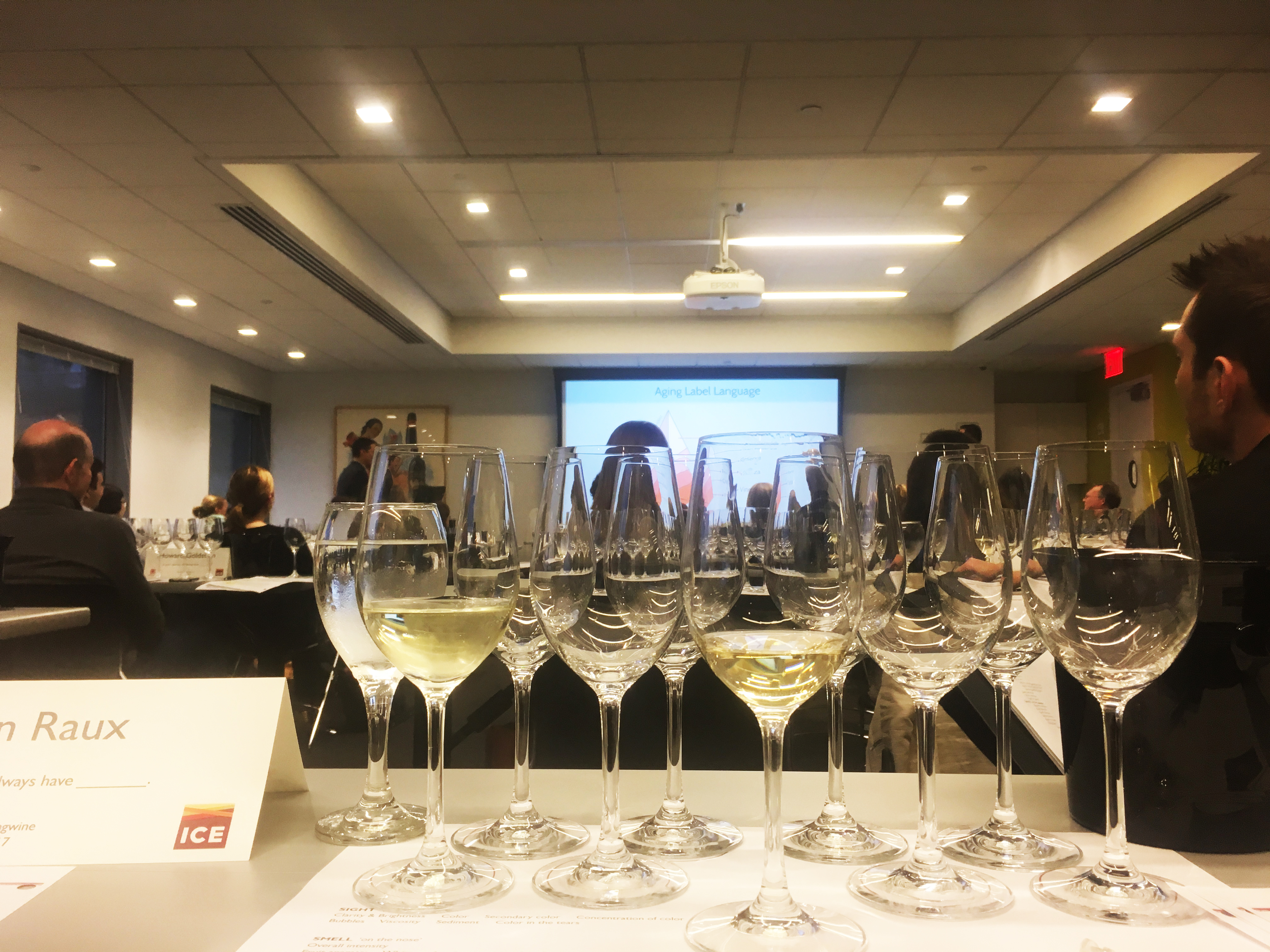 Every Tuesday night, a roomful of food and wine lovers like myself gather at ICE to spend a few hours smelling, tasting and learning to talk about wine. Each week, the focus shifts to new regions or grapes — Wines of Italy; Burgundy and Bordeaux; New World Wines, etc. — and a different local wine expert joins the class: Kyungmoon Kim, sommelier at The Modern, and Jenni Guizio, Wine Director at Maialino, to name a couple.

On this particular week, a post-work meeting had me doubting whether I would be able to make it. But I’ve come to look forward to this weekly wine ritual — you don’t have to twist my arm to get me to enjoy eight delicious wines. I hustled to make it just in the nick of time and settled into my seat with the half-glass of sparkling wine that greeted me as I entered. When I flipped open our course binder and discovered that the night’s theme was The World of Riesling, I sighed quietly and sunk into my chair, wishing that the meeting would have gone long. I felt about Riesling the way I do about cole slaw — sure, I'll take it if it's in front of me, but I'd never order it. It's too sweet, so I thought, and just not my thing.

Hoping for the best but prepared for the unremarkable, I joined my classmates on a voyage through Riesling vineyards in Germany. “Riesling is the most glorious white grape in the world,” Paul proclaimed. Boom. But what about those white wines from France we tasted a couple weeks back, made with Chardonnay and Sauvignon Blanc? We began swirling, smelling and tasting, to see if he could convince us on the grape’s merits: versatility, yumminess (his word, not mine) and potential to express its home turf or terroir.

The first three wines, all from the Mosel region of Germany, shook my wine world. I thought Rieslings were supposed to be cloyingly sweet — these wines were anything but, and super versatile. Though produced in nearly identical conditions — same grape, same vintage (2015), same producer, same vineyard — the grapes of each wine were picked 10 days apart. John explained that the difference in ripeness accounted for the huge variation between the wines. All were high in acidity (that thing that makes your mouth pucker and water after a sip), but completely different in terms of intensity: from light and elegant (“Kabinett” style) to dry (“Trocken”) with intense orchard fruit flavors.

As we headed southwest to the Alsace region of France, I started to convert — I started to become a fan of Riesling. According to Paul, whereas German Rieslings are characterized by unbridled acidity with the potential for residual sugar, Alsace Rieslings are all about the power (read: alcohol). Wine 5 — a 2005 Brand Grand Cru Riesling from a third-generation producer Albert Boxler — was downright yummy. I couldn’t have put it better than Paul, who described it as “fully ripened grapes in a glass.”

From there, we flirted with comparable grapes — Gewürztraminer from France and Grüner Veltliner from Austria, while slurping up cold sesame noodles flecked with spice, courtesy of the hit restaurant, Untitled — a perfect pairing for the fruity, aromatic Gewürz.

We nibbled and listened as Paul filled us in on the winemaking history in Austria. Austria was enmeshed in a grape juice scandal back in the 80s, when several winemakers were caught adulterating their wines with diethylene glycol — yup, that’s toxic — a trivia tidbit that prompted Paul to ask the class, “What’s your favorite scandal?” “The OJ scandal!” chirped the aspiring somm in the front row. We were six wines deep at that point and emboldened by sprightly white wine. “Let’s scale it back,” Paul joked, and we forged on.

Our final wine was far less scandalous than the Juice (the football player, that is) and far more crowd-pleasing: a reasonably priced 2015 Bründlmayer Riesling from the Kamptal region of Austria. My tasting notes read: high acidity, dry, only a touch sweet — love (underlined). By this point, Paul had won me over. Best part, with the low alcohol levels of all of the wines, I had no semblance of a hangover the following day. Now that’s a happy ending.

If you’re an aspiring sommelier or a wine lover looking to take your wine knowledge to the next level, register for Understanding Wine.