The Sweet Genius and Guest Master Pastry Chef, Ron Ben Israel treated us to a beautiful demo last week. He showed us how to design one of his beautifully crafted 3-tier cakes with a marble finish. This was a real treat (especially eating it after).

Before he started on the main part of the cake design, he and his “elf helpers” (student volunteers) worked from the outside in. The 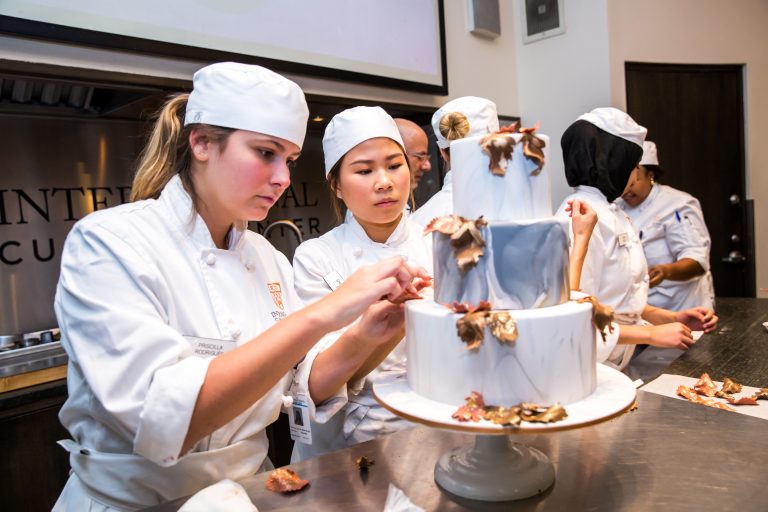 cake was to be an autumn theme, so what is fall without some leaves? Chef Ron Ben Israel used a pasta maker during the demo to roll out the sugar paste, which he said: “each machine is different but it’s better than by hand for consistency”. After going through the machine to achieve the desired thickness, the “elves” started placing the thing sugar paste into silicon molds or using cookie cutters to make the leaves.

You don’t want to use metallic when working with the silicone since it is likely to damage it. Once the leaves had a shape, Chef showed them how to make the leaves seem more lifelike. The trick is using a metal ball fondant tool to thin the edges out a bit more to replicate real leaves which are “thin, delicate and elegant”. You also always want to be working close to yourself to help with accuracy. Another key factor is, once the sugar paste is ready you must work fast or it will dry out. Next, Chef started creating the fondant to be used on the exterior of the cake. The challenging part about making marble designs is you never know how it will turn out.

To be able to complete all this, one must be very organized. Chef Ron Ben Israel credited his organizational skills when he was a disco dancer back in the day. Chef Israel was actually a professional dancer for about 15 years after being in the Israeli army. So I asked, “how did you realize that cakes were your passion?”. To which Chef responded, “I was in the desert and saw a burning bush and saw a wedding cake in that burning bush”. He then explained that when he was younger he always liked the kitchen and would spend time there with his mom. Though, she would always kick him out since he never liked to clean! Pastry chefs always seem to be somewhat of a happy comedian and Chef Israel is no exception. Perhaps it’s all the sugar they consume.

How did he really get involved in the pastry world? Well, it’s much like anyone else when you move to a new place, you need a job. When Chef Ron Ben Israel first moved to the US he needed income and new the right person to ask. He asked his friend who helped him get a job at a chocolate store and after 2 weeks he was addicted. 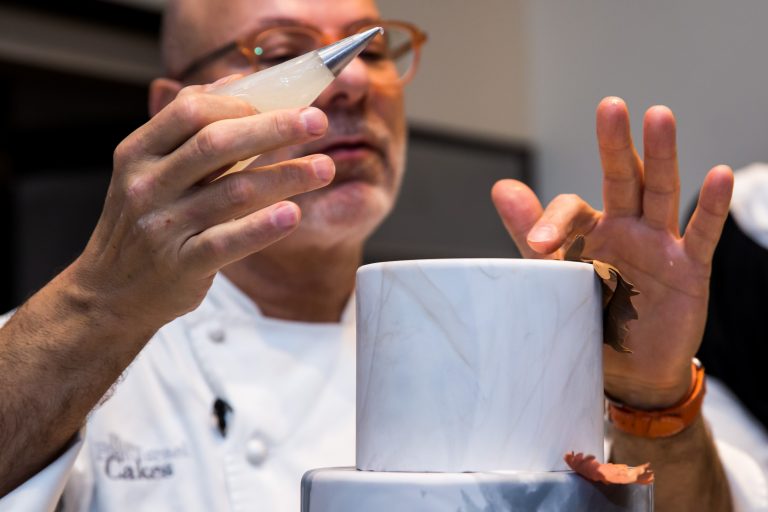 He then became a cake designer and would create displays for store windows. Luckily for him, Martha Stewart walked by one day and wanted his help for her wedding magazine she was starting. The hustle was real; Chef Ron Ben Israel also rented a space at night from a caterer that had everything he needed for doing cakes. Hard work, determination, talent and a bit of luck is really what is needed to become successful. He credits networking for helping him establish his business. Later in his career, Founder Dorothy Cann Hamilton invited him to do a cake demo and after talking to her for 5 minutes, he decided to become an instructor (something he never thought he would do).1

Back to putting together the cake, Chef Israel had many interesting tools including a PVC pipe that he purchased at a local plumbing store. Chef Ron is very serious about supporting locals business. The PVC he said is great because it can be put in the dishwasher along with it being the right weight to place on top of the fondant. Of the 3 tiers, the top and bottom already had their marbling fondant thanks to one of our graduates (Margret) who works for Chef Ron Ben Israel. He also said that his Sue Chef is another ICC grad that was hired years ago and has never left.

The marbling look was created by placing pieces of different shades of grey fondant overlapping then rolling it out. Every marble look is unique since there is no exact way to do it. Chef Israel then draped the fondant for the middle tier cake and used his tools to flatten the top and keep the sides in tight, along with cutting off the bottom. The cake is almost complete! Chef likes to be very precise so he uses miter boxes to cut the bamboo dowels that help support the cake. It’s important to measure your dowels based off the original cut dowel, otherwise is easier to get a variation of sizes. Each dowel was placed an inch from the outside of the cake to help support the next tier. After they had all been stacked, Chef Ron Ben Israel uses nontoxic kids glue to help glue the outside bottom for the ribbon (not edible).

The leaves were then painted with shades of gold for some pop, then placed all around the cake. Royal icing can be used as glue but it makes a space, turns white and/or leaves a mark. Whereas piping gel is clear and if you mess up you can wipe it off without leaving a mark. Once all the leaves were placed, the most important part of cake creation took place; pictures and eating it! It was the best fall spice cake I have ever had. This is what I want for my birthday, wedding, anniversary, and any other good reason to enjoy such an amazing masterpiece! 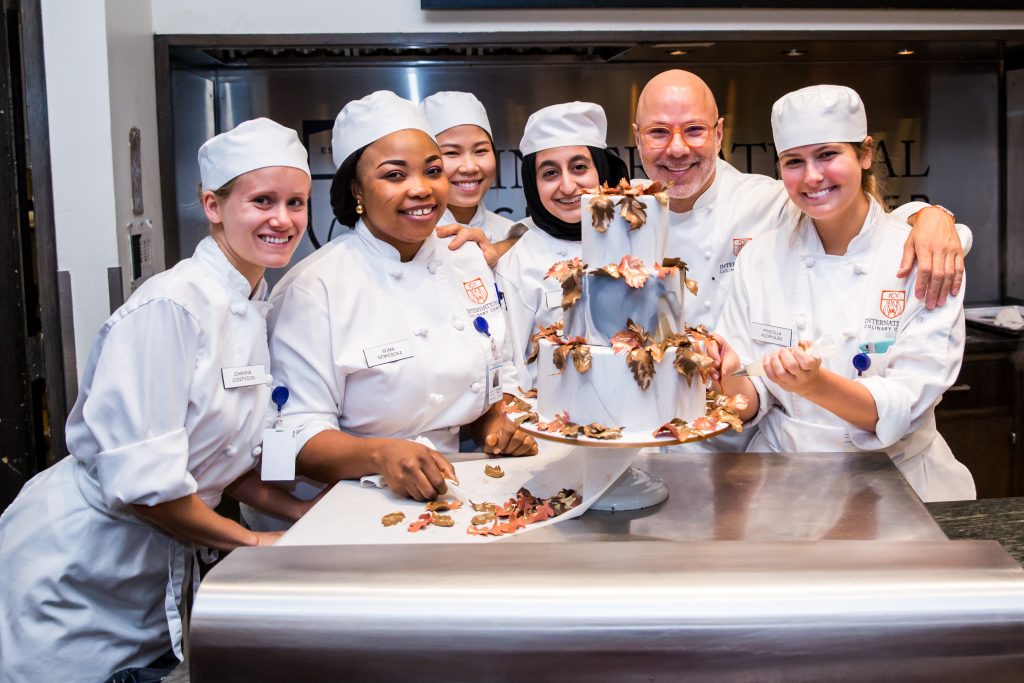 This blog post was originally published by the International Culinary Center (ICC), founded as The French Culinary Institute (FCI). In 2020, ICE and ICC came together on one strong and dynamic national platform at ICE's campuses in New York City and Los Angeles. Explore your cake education where the legacy lives on.