Dean of Wine Studies Scott Carney evaluates flavor combinations with the Spanish fortified wine while judging a national StarChefs competition with chefs, sommeliers and many courses.

In the competitive world of business, there are various tactics one can employ to build sales of one’s product. One time-proven method is to represent that the product has changed — and been improved — in some fashion to provoke continued interest. Think: Burger Kings’ Impossible Whopper with fewer calories and less fat to transcend the iconic Whopper. Another device is to invent new ways for your product to be used. Whereas Champagne was once thought of as the drink for celebration and the perfect aperitif, the Champenois did not rest content with those usages. On came the multi-course dinners with various Champagnes being served with each of the courses. And that roast duck breast entrée was pretty fantastic with Krug rosé!

So, the world turns and it came to pass that I was invited to judge a competition with StarChefs for the Copa Jerez, a fascinating exercise in pairing sherry — that grievously misunderstood beverage of human craft and ingenuity — with a three-course meal. The field of competitors had been whittled down in the U.S. to three chef-and-sommelier teams. One of the teams played host to the filmed event at its as yet unopened restaurant, Contento, in Spanish Harlem. The two other contestants were teams from Mercado Little Spain in NYC and RN74 in Seattle.

The event was organized to have each team execute their three-course presentation and pairing in its entirety, making direct, immediate, appetizer-to-appetizer comparisons, unfortunately, impossible. In retrospect, some juxtapositioning would have helped in making qualitative evaluations because everything tasted great!

Four judges scored categories of Quality/Execution, Wine Pairing and Presentation on a scale of 1 to 5 for each of the three courses. I was fully absorbed with the logic and success of the wine pairing and the degree to which the chef-somm teams would venture out on a dare with something unexpected. 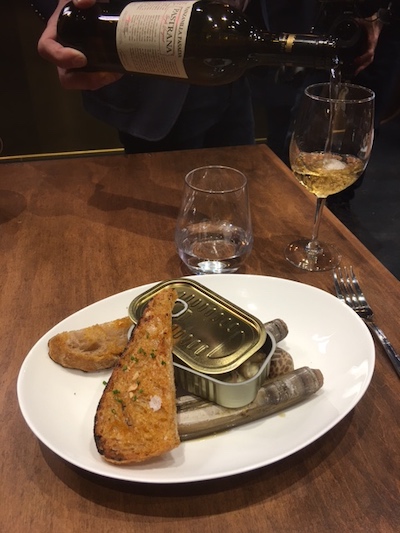 With each appetizer, we saw Manzanilla sherry in all its classic glory, reveling amid the appetizers, an enticing lead-in to eating and drinking. Breaking away from straight Manzanilla, RN74 gave a wink and a wrinkle as Sommelier Jeff Lindsay-Thorsen paired Razor Clams en Cidre with Toasted Levain, Whipped Iberico Chorizo and Golden Garlic with Bodegas Hidalgo la Gitana "Pastrana" Manzanilla Pasada, a rarely seen aged Manzanilla that brought a note of delight to my mind and umami to my mouth.

Despite the fact that each team presented individually, every crescendo from appetizer to entrée brought a surge of creativity in visual presentation, a constellation of flavor and sheer intellectual stimulation. Each chef-somm team was required to present the story of the development of the dish and the pairing. Philosophies were floated; hilarious anecdotes recounted as we were brought into the workings of the minds that brought these food and wine pairings to bear.

All the entrees brought me to pauses of awe. 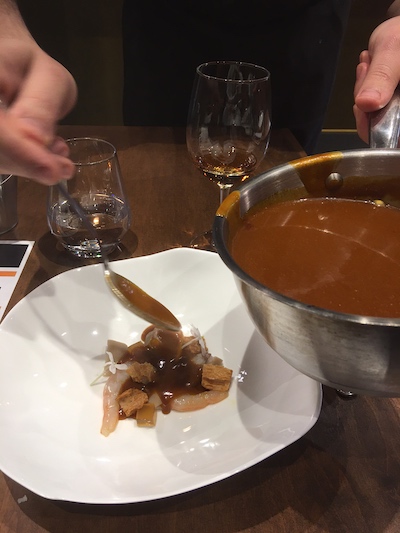 Mercado Little Spain stunned me with the Callos Sauce, a secret sauce that could have been charged with insider information. From a traditional Madrileño stew, this soulful broth, composed of beef tripe, ox cheek, Iberico ham and thickened with garbanzo beans, was offered as a tribute to the Gatos’ long-standing love of sherry.

White Shrimp and Iberico Ham Consommé, Crispy Bread and Callos Sauce struck at the fundament of consuming other life. This act was quickly forgiven, rationalized and embellished by the companionship of Lustau Jose Luis González Obregón Almacenista Amontillado which gave lift and adorning fragrance to this other-worldly creation. 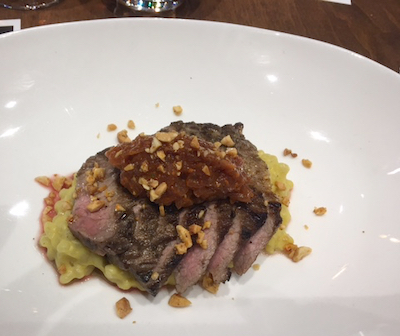 Contento’s chef, Oscar Lorenzzi, of the home team, knocked this one out of the park with his Secreto Ibérico with Wheat-Corn Cremoso, Onion Escabeche and Spicy Peanuts.

The goal with any pairing is to aspire to synergy with the total becoming greater than the sum of the parts. Contento’s gambit was to do this by building an exquisite and self-contained whole in its food and inducing the synergistic explosion through this terrific wine. To do this, Sommelier Yannick Benjamin took measure of the grandeur of the dish and accessed the deep reserves of aged sherry. He leaned into the tenets of molecular gastronomy and clarified how texture, freshness and breadth brought about the desired effect with the Bodegas Poniente Amontillado VORS.

In 2000, the Consejo Regulador of Jerez chose to showcase their wines of great age and high quality through a certifying system that gave special recognition to wines whose average ages were 20-year “VOS” and 30-year “VORS” (Very Old Sherry and Very Old Rare Sherry, respectively). This VORS Amontillado is a quintessential marriage of wine and wood: bone dry, with scents of both surf and turf, almond skin, dank cellars and iron, with a mysterious timelessness you could write a story about. Ha! 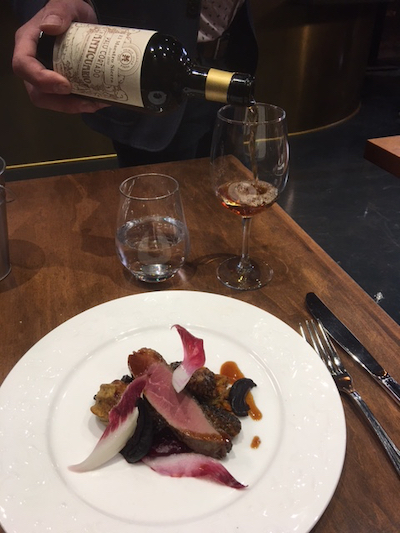 El Maestro Sierra Palo Cortado Anticuario is a wine that defies easy categorization. In fact, sherry expert Peter Liem asks rhetorically whether the category of Palo Cortado still truly exists. With long aging as an amontillado under the flor, it transitions its life as an oloroso – oxidatively aged - and generates a roundness that can exasperate the intellect in its completeness. From a 70-year-old solera, Sommelier Lindsay-Thorsen called it an umami bomb! It furthered the outrageous excellence of the dish, and I had to restrain myself from just standing up and clapping. 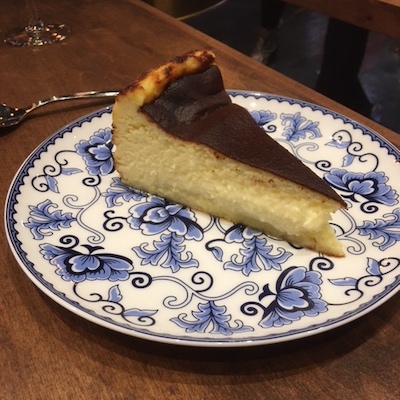 In the culinary world, it is often said that simple is hard. It takes a certain kind of confidence to proceed with the best of ingredients and just execute. Extras are excuses. So, when Mercado presented their third and final course, its simplicity was a dare. A slice of cheesecake. For Copa Jerez? I want to hear the presentation. I want an explanation.

Payoya Cheesecake: Chef Nicolas López and Sommelier Jordi Paronella approached before the judges and began. They first expounded on color theory: the golden, the ochre, the yellow, the amber. Earth tones. They concurred on the good acidity of the salty goat cheese. Chef said it was cooked quickly on an open wood fire at high temperatures to caramelize and singe the top. They then disarmed me with a little ju-jitsu: the origins of the dish began with some NYC cheesecake, making its way to Spain and returning in the present incarnation. With it sitting nakedly on the plate, they confided that their impulse was to adorn, to garnish to complete the dish. What to do?

Well, of course, the answer was revealed in the bottle that approached the table. Do nothing, but drink this: Bodegas César Florido Moscatel Dorado.

The first bite created a sort of cognitive dissonance: It was the most flavorful air I’d ever inhaled. It was in both solid and gaseous form at the same time. A sip of this orange-blossomed elixir only heightened the delightful disorientation. I could not help but notice my esteemed colleague and fellow judge, Alexander LaPratt MS, devour his piece, overtaken by its unbearable lightness of being. A cheesecake too beautiful to live, it was gone in a flash.

When the tasting concluded, we set about the scoring. The contestants awaited our decision. They were out front of the restaurant in some of its outdoor seating. We four judges labored mightily with our scorecards. We then went into deliberation. Everything was so good, nothing was certain. At length, a decision was made. We declared Mercado Little Spain the winner of the U.S. finals. Conditions pending, they will go to Jerez in the fall to compete against eight other nations.

While it was hard to come to terms that there would be only one winner - that is the onus of judging – I could only come to more deeply appreciate the spirit of sport, creative competition and sportsmanship that the contestants so professionally demonstrated. Copa Jerez, indeed!