An all-star panel assembled at the International Culinary Center on a sunny Saturday afternoon to impart advice from their entrepreneurial experiences.  The lineup included social media star Allison Robicelli and her husband Matt Robicelli (Pastry ’04) of the fast-growing Robicelli’s.  They spoke alongside Liz Gutman (Pastry ’08) and Jen King (Pastry ’08) of Liddabit Sweets and Rob Liano (Culinary ’12) of the hilariously named Baby Got Back Ribs.

May 10, 2013 by International Culinary Center

Erik Murnighan moderated the animated panel, which covered a lot of ground. Here are my takeaways — the “rules” offered by these pros:

1. Respect the Food, pursue your passions

Allison and Matt said they began their business because they wanted to respect food, and make affordable items with the same care and respect the chefs at expensive restaurants gave to their rich customers.  Why do you have to be rich to eat well, they wondered?  So, starting with a Honda Civic and $30 from their son’s piggy bank they began making cupcakes in a working class neighborhood.   As they began, they made an early commitment that they would only use French cream and would avoid food coloring.  This commitment to quality has remained at the core of their business.  Additionally, Jen build on this theme of having a purpose by encouraging food entrepreneurs to be your own story.  “Build your narrative and your own brand.”  Allison discussed that if you are not yourself, you will burn out.  “It’s just too exhausting to pretend!”

2. Entrepreneurs don’t seek out risk, they use planning to minimize it

Jen King noted that while there isn’t a sure bet path to success, planning can help you improve your odds.  “There is no A + B gives you C.  What business plans, marketing strategies, and all of this does is gives you a better chance.”  Rob agreed saying “there is no right or wrong way, but there is also no easy way.”  By thinking through some of the key assumptions, you get comfortable thinking through what will actually make you money.  This type of exercise helped Rob walk away from a potential investment.  Sound crazy that he said no to a potential investor?  When he did the math he realized he would put in the work but not take home the returns.  By taking a pass he’s now free to explore other opportunities that may be more lucrative. 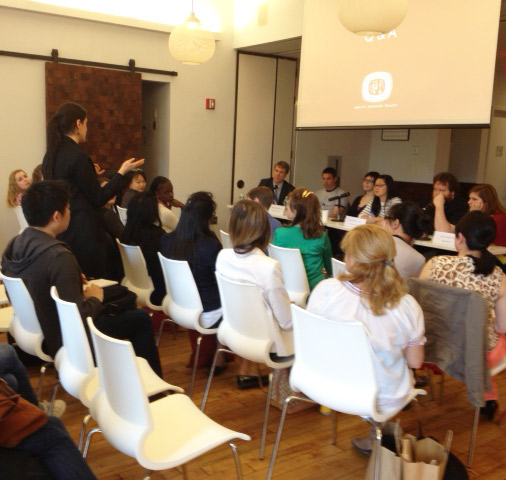 3. Get comfortable with “No”

Each of the entrepreneurs talked about the failures they experienced along the way to success.  The winning entrepreneurs are the resilient ones, they just keep at it!  Early on Rob paced himself, avoiding investing too much in a physical space or other capital as he built up his brand.  Eventually, more and more people have reached out.  “Then, opportunities come to you.  You don’t ask, they just come to you.”  As you experience success, you have to be as disciplined about saying “no” as you once had to be about pushing through “no!”  Jen King said this was one of the hardest things for her.  “You think, because you are so young, that you must say ‘yes’ to everything.”  But really, you have to learn to prioritize.

4. Start selling now, and keep a bias to action!

Liz Gutman and Jen King met at International Culinary Center.  While still in school, they both assumed they would need more experience to launch their business.  “We initially thought we needed to go train under people… and learn more,” Liz said.  But actually getting out there and selling gave them the best feedback.  While Jen said that oftentimes she feels like she doesn’t know what she is doing, the two have been remarkably successful already.  The experience behind that success?  Getting out there and trying things.  Early on, they passed out candy as guerrilla marketing.  Liz: “Start selling now.”