There’s currently one chef on ICE’s staff who is registered as both an instructor and a student. That’s because—despite more than 25 years in the industry—Chef Scott McMillen is far from finished learning. Whether enrolling in Chef Toba Garrett’s cake decorating classes, Chef Sim Cass’ intensive bread baking program or, most recently, earning a diploma in Culinary Management, Chef Scott has stayed hungry for new opportunities to push his skills—and pass those skills on to his students. 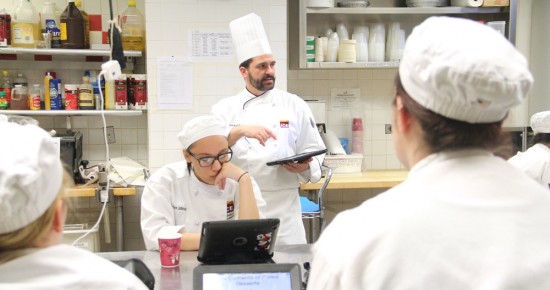 “I love working alongside colleagues with such diverse backgrounds and expertise,” says Scott. “It’s a completely different opportunity than I had coming up in a restaurant kitchen, and I never tire of taking my skills to the next level.” Yet Scott wasn’t always such an enthusiastic learner. In fact, it was his decision to abandon traditional college studies that opened his eyes to the possibility of a future in food. “I always enjoyed cooking, but I never considered it as a long-term career.

But when I took time off from school, I realized I was spending all my free time in the kitchen. So I enrolled in a culinary arts program, and I’ve been in the industry ever since.” In just over a year, Scott had gone from a directionless college student to an up-and-coming cook. His first job was at the prestigious Manhattan Ocean Club, a luxury establishment in New York City’s hotel district. Despite his culinary training, his natural talent for pastry impressed the club’s chef, and within three years Scott had advanced to the position of Executive Pastry Chef.

This was no ordinary restaurant job. From day one, Scott was dealing with an unusually large volume of desserts. A team of only three chefs (including the executive pastry chef) would prepare 300-400 plates each day, balancing the tastes of the restaurant’s fine dining clientele with limited time and resources. Yet Scott saw the intensity of this fast-paced environment as an opportunity to refine his organizational skills and speed.

“Working with the limited resources and high expectations like those we had at the Ocean Club meant learning to not let other people see your limits—a great lesson for a young chef,” says Chef Scott. From tempering chocolate in hundred degree kitchens to balancing his demanding production schedule with the development of new desserts for the restaurant’s ever-changing menu, it was a marathon of creative and logistical challenges.

Scott stayed at the Manhattan Ocean Club for twelve years—an outlier in an industry notorious for staff turnover. “As a chef, it’s unusual to stay in one place for so long, but when you work in a well-run restaurant with good people, there’s nothing better,” he asserts. In 2002, inspired by the mentors who had developed his skills, Scott began teaching part-time at ICE, joining the full-time faculty in 2004. The shift from a kitchen of three to a staff of dozens of chefs was a dramatic change.

Surrounded by endless opportunities for personal development, he dove into areas of pastry studies that he previously hadn’t had time to explore. “It’s one thing to learn how to decorate a cake in the Australian string style—it’s another to develop that skill and study how to teach it to another person. You really have to master your craft." Scott’s hunger for knowledge has rubbed off on his students as well. Head Baker and Co-Owner Dave Crofton of One Girl Cookies and entrepreneurial cake designer Leigh Koh Peart are just two of the noteworthy alumni Scott has trained at ICE. “I still hear my own culinary school instructors' voices loud and clear in my head, and I enjoy the opportunity to make a lasting impact on my students’ careers.” 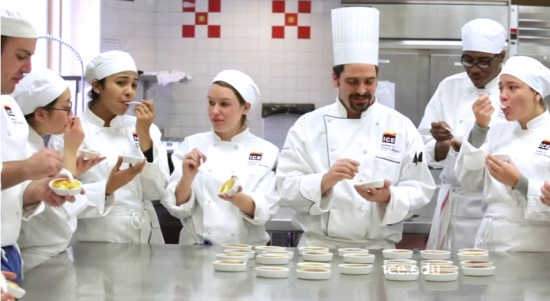 What’s more, this continuing education has given Scott a special appreciation for the benefits of culinary school: “If you’re a career changer in your mid-twenties or older, culinary school really accelerates the process. When you start off in kitchens, each environment has a very narrow focus. The broad range of skills you learn at school means you can advance your career that much faster.”