Anup Joshi Named Among Zagat's 30 Under 30

ICE alumni are finding success throughout the food world, from James Beard Awards to magazine features. 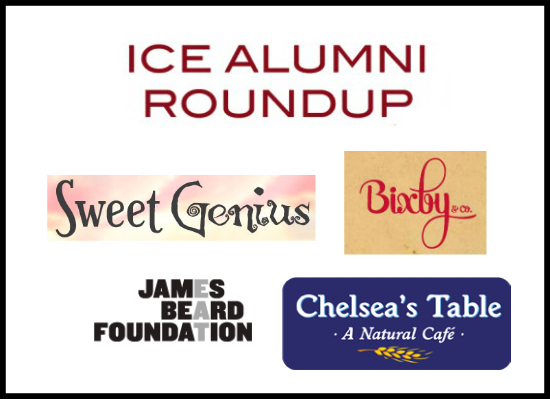 From winning awards for food video production to receiving attention for opening new restaurants, our graduates often have many incredible achievements. Check out just some of the alumni finding success and making recent headlines throughout the industry.

The James Beard Awards were held in early May, and ICE alumni were among the recipients! "Modernist Cuisine" by Nathan Myhrvold with Chris Young and Maxime Bilet (Culinary, ’05) won in the Cooking from a Professional Point of View category, as well as Cookbook of the Year. Jamie Tiampo (Management, ’06) also took home the award for Video Webcast for eatTV.

Angela Cuervo (Pastry, ’07), owner of Making That Cake, was a contestant on the new season of Sweet Genius on Food Network.

David Seigal (Management, ’03) appeared in The New York Times' “Off the Menu” column, as chef of Chelsea's Table, a new family-friendly restaurant in Chelsea Piers.

Emily Peterson (Culinary/Management, '09) was recently recognized by Chef2chef as one of the country’s top 50 culinary instructors to follow on Twitter.

Anna Levien (Pastry, ’06) appeared in the New Jersey Herald in a piece on vegan cooking.

To network with these ICE alumni and many more, you can connect with Career Services on Facebook or LinkedIn.

How a Marine Corps Veteran Became a Pastry Chef

Marcus Samuelsson on His Most Important Work Ever