The Institute of Culinary Education brings Health-Supportive Culinary Arts career training to the West Coast! Our exclusive curriculum promotes whole foods, nutrition, wellness and sustainability with vegetable-forward recipes inspired by the Natural Gourmet Institute. Health-supportive cooking can optimize plant-based, vegetarian and vegan lifestyles, while including instructional exposure to proteins. The program explores food as medicine and diets such as Ayurvedic, macrobiotic, gluten-free or dairy-free.

America's Best Culinary School* now offers America's first nationally accredited health-supportive, plant-based curriculum. Annemarie Colbin, Ph.D. founded the Natural Gourmet Cookery School in her Upper West Side apartment in 1977, two years after Peter Kump founded his eponymous cooking school (now the Institute of Culinary Education) in his apartment nearby. Both went on to become accredited diploma programs, move to the Flatiron district and change their names. In 2019, the educational institutions collaborated to offer the Natural Gourmet Institute's unique health-supportive approach to cooking at the ICE's New York and Los Angeles campuses in New York City and Los Angeles. Aspiring chefs and food enthusiasts can explore ICE's fifth and newest career program to customize their education in one of America's culinary capitals.

Foundations of the Curriculum

The Natural Gourmet Institute used specific criteria for making mindful and deliberate decisions when sourcing ingredients: whole, fresh, seasonal, traditional, balanced, local and delicious. These seven principles of food selection promote a sustainable food system with regard for natural resources and people while empowering chefs and cooks to lead the conversation about food, wellness and health. This mission is at the foundation of ICE’s new curriculum, which incorporates whole foods, nutrition education, plant-based cooking and meals that heal. The principles extend to the pastry modules, which include flourless, vegan and gluten-free desserts and breads, as well as traditional pastries.

Food has powerful potential to promote health. The Natural Gourmet Center’s food and healing coursework focuses on how to maximize the health benefits of ingredients and cooking techniques. Eastern and Western food theories and applications are incorporated into interdisciplinary training. Nutrition and health experts lead practical classes and lectures on topics such as soy foods, raw foods and cooking for specific diets, whether Ayurvedic, dairy-free, gluten-free or macrobiotic.

Students are required to apply the skills and techniques taught in the classroom in professional kitchens or workplaces through a 200-hour externship that completes the program. ICE’s career services division will help you find the best position for developing, learning, gaining work experience and building a professional network in your desired field.

A Career in Health-Supportive Cuisine

The Health-Supportive Culinary Arts program consists of 632 instructional hours. Students are in the classroom for 432 hours and then complete an externship over the course of 200 hours, acquiring real-world experience in the culinary field.

To provide flexibility, we run several schedule options for our Health-Supportive Culinary Arts diploma, including morning, afternoon and part-time schedules. Choose from schedules that meet from two to five times per week.

Take the next step

The admissions process is the start of a lasting relationship with ICE. Your admissions representative will introduce you to the personal experience the school is known for. His or her mission is to understand your career goals, help you select the right program to fit your needs and ensure you find a class schedule that suits your lifestyle.

You know it's in you — the ambition to pursue a rewarding career in food. Attending culinary school is one of the best ways to begin the journey. ICE is ready to help you find your culinary voice.

12 Reasons Why You Should Choose ICE.

Learn about International Students at ICE.

Ready to take your interest in ICE further? Speak to an admissions representative about your personal goals, start your application, or download our career brochure so you can access our program information anytime.

The 632-hour Career Health Supportive Culinary Arts program contains four modules divided into nine courses. The first eight courses are composed of 108 four-hour lessons that are held on campus. The ninth course is an off-site externship.

The program is constructed as follows:

Focusing on fundamental culinary techniques and criteria for selecting quality ingredients, this course will offer an introduction to the foundation for preparing health-supportive, whole-foods cuisine.

In this course, we continue your education on plant-forward cuisine to include a variety of bean and grain, seitan, stock, soup and sauce preparations. We also teach how to prepare eggs in a variety of savory and sweet applications.

In this course, we prepare soups and stews highlighting whole grains, beans, vegetables and non-dairy alternatives. We teach how protein sources come in a variety of forms – both plant and animal. We also teach how to source and prepare poultry, fish and shellfish, as well as how to prepare soy foods in health-conscience, traditional forms.

In this course, you will apply your growing command of health-supportive techniques to preparing salads, hors d’oeuvres, pâtés and terrines, and a buffet. In the career realm, you will hone your skills at menu planning and recipe writing while exploring career paths in personal and private cooking, catering and teaching. You will also study theoretical approaches to the energetics of food, factors that impact longevity, and the role of fats, protein and carbohydrates in a healthy, whole-foods diet.

The quality of our baking and desserts can benefit from using ingredients that are more natural, unprocessed and whole. In this course, we convert conventional baking recipes to alternatives featuring whole-grain flours and less-refined sweeteners, without sacrificing taste or texture. You will also prepare baked goods and desserts that meet special dietary needs, such as vegan, gluten-free and dairy-free.

As you continue to explore the art and science of baking, you will focus on yeasted breads, quick breads, pizza and focaccia with wheat-free and gluten-free options. This course also includes pasta making.

The link between diet, lifestyle and wellness is well-established, and this course will provide perspectives on this relationship by looking at cardiovascular system health, the microbiome and detoxification systems. On the culinary side, we prepare raw foods, living foods, and spa and retreat specialties. You will also focus on improvisational cooking using seasonal ingredients and developing a vegan, four-course banquet project.

FOOD AND HEALING 2 AND WORLD CUISINES

This course extends the emphasis on integrative health as it explores food and the immune system, kitchen pharmacy, diets designed to promote cancer prevention and treatment support, Ayurveda, and Macrobiotics. You will prepare specialty dishes from Asia, Mexico, India and Italy.

At the end of their in-class training, all students are assigned an externship. While the Institute of Culinary Education recommends that students extern in restaurant kitchens, they may request venues such as hotels, catering companies, corporate dining rooms or pastry shops in accordance with their professional goals.

Please note: Dishes are examples and are subject to change with curriculum updates, without notice.

At this point, you’ve already decided that you’re interested in a professional future in food and hospitality. But should you attend culinary school, and can you can really afford it?

The ICE Office of Student Financial Services puts an award-winning culinary education within your reach. Our advisors are available six days a week to help make your dream of attending culinary school at ICE a reality. 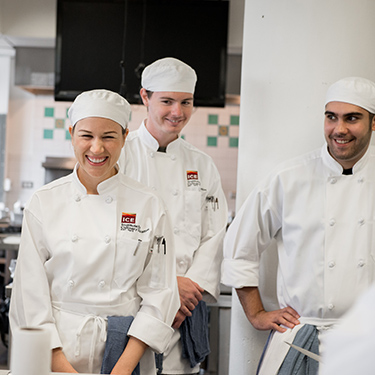 ICE provides various scholarship opportunities to assist students on their journey towards a career in food and hospitality. Whether offered by ICE itself, our food industry partners or a vetted list of outside organizations, these scholarships provide students with additional resources to realize their dreams of attending our career training programs. Please be aware of the varying deadlines and application requirements for each individual scholarship. For additional information about any of the available scholarships, feel free to contact our Office of Student Financial Services directly at (888) 826-CHEF or LAfinaid@ice.edu. 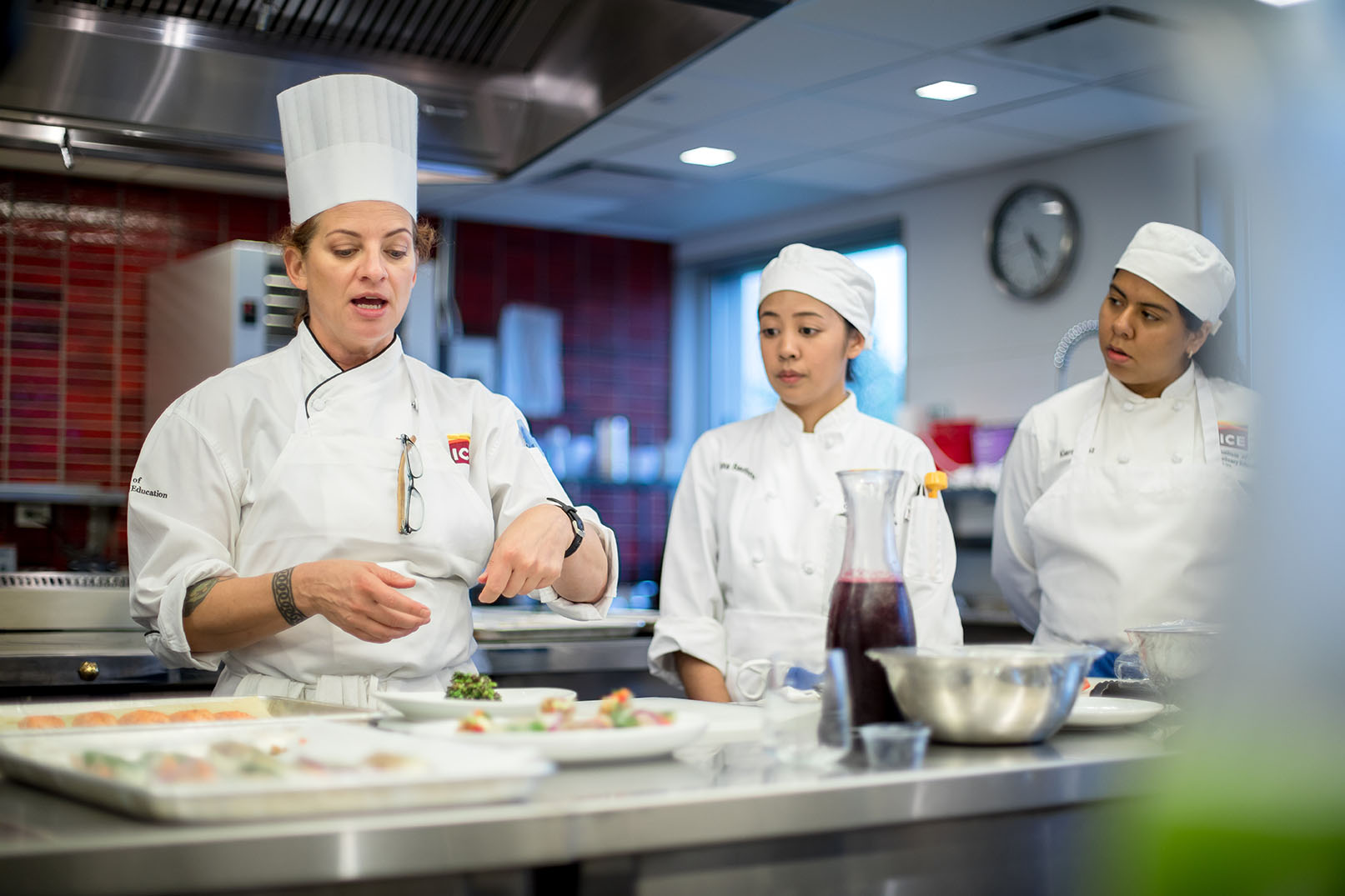 ICE offers financial assistance to those students who qualify:

To learn more about financing options, feel free to contact our Office of Student Financial Services directly at (888) 826-CHEF or LAfinaid@ice.edu.

Please contact us with any financing questions. We will work closely with you to prepare the necessary forms and documents.

Learn how to apply for financial assistance at ICE.

This veteran of the Natural Gourmet Institute brings his plant-based cooking expertise to ICE.

What exactly is an “externship”? Similar in concept to a culinary internship, these paid or unpaid placements are chosen at a student's discretion with the assistance of Career Services Advisors. Each externship is is designed to fit the interests and career goals of the individual student, and externships consistently prove to be an exceptional opportunity for hands-on training and networking at the heart of the industry. What’s more, many externships lead to job offers and full-time employment.

How does the externship program work? The final course of our Health-Supportive Culinary Arts program is a 200-hour externship at a restaurant, bakery or other culinary business. 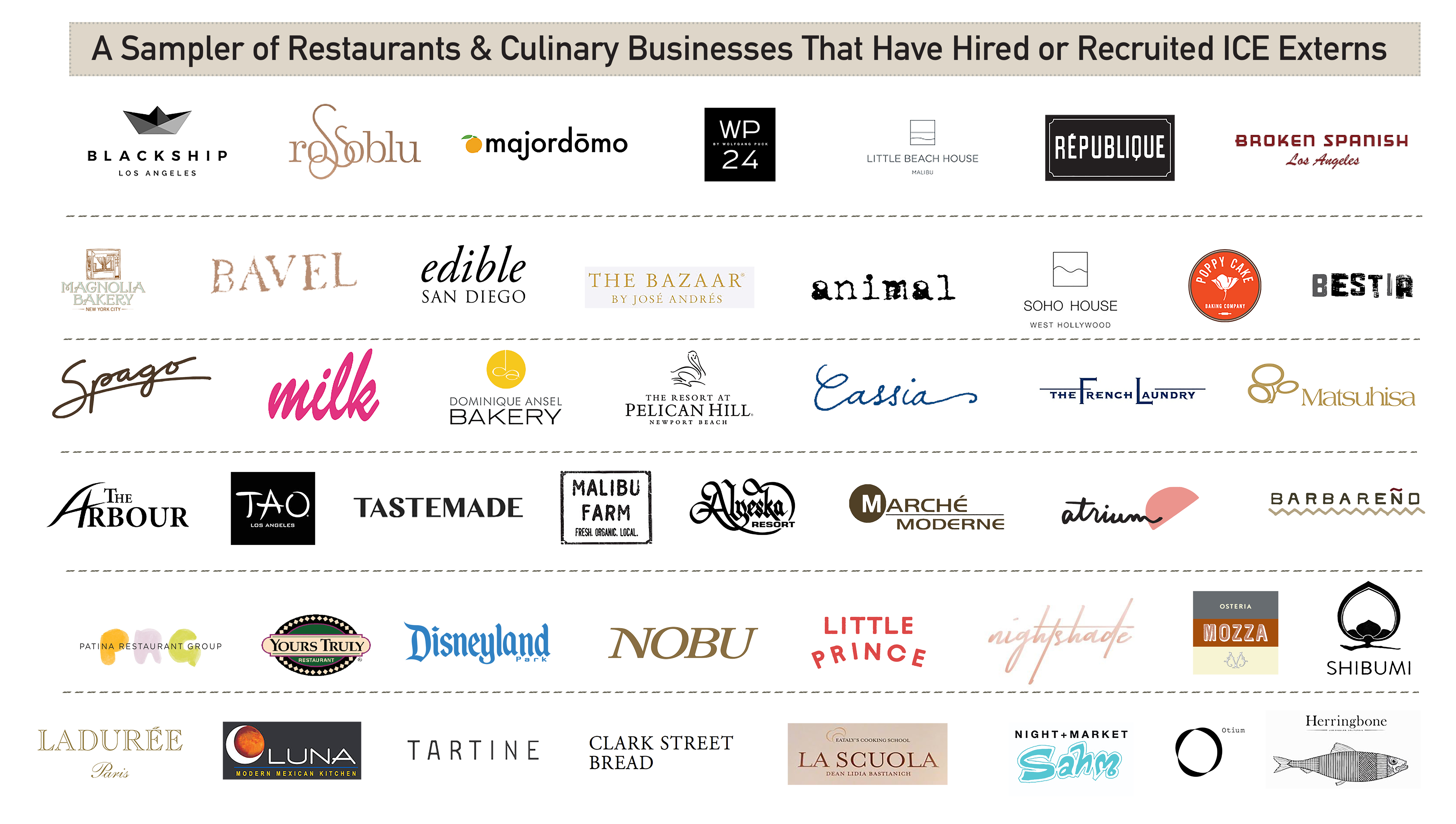 From 1977 to 2018, the Natural Gourmet Institute graduated more than 2,500 professional chefs from 33 countries who became chefs, entrepreneurs, teachers, nutritionists, authors and even physicians. Meet some of the NGI community's thought leaders: 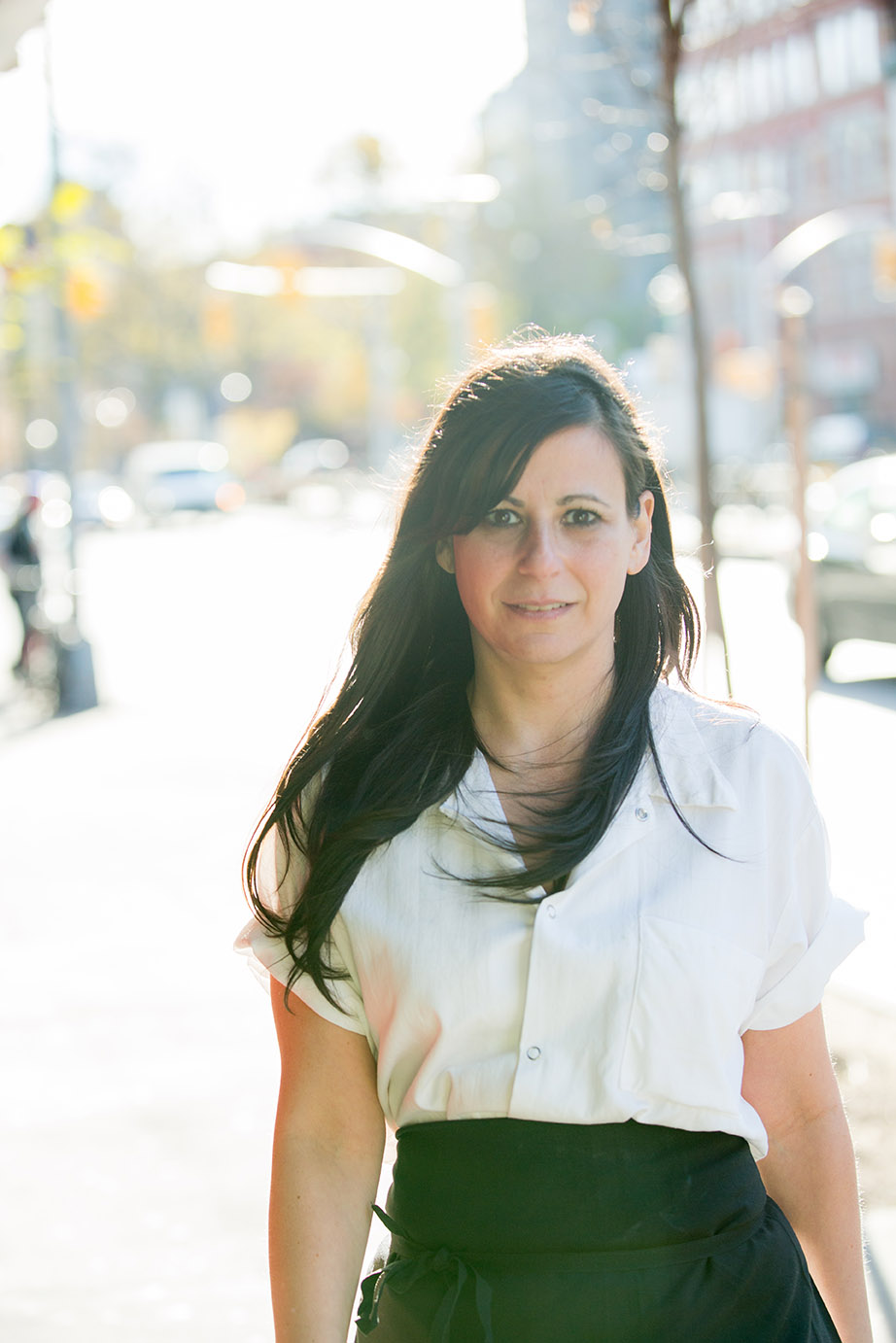 Amanda Cohen is the chef-owner of Dirt Candy, a vegetable-focused restaurant on New York City's Lower East Side, which celebrated 10 years in 2018. The chef features seasonal vegetables as main courses, without a lifestyle or political focus, innovating with constantly changing ingredients.

Chef Cohen is from Ottawa, Canada, and attended the Natural Gourmet Institute's Chef's Training Program in 1998. "NGI really gave me the tools to go into kitchens and feel really comfortable," she said. "And one of the things you start discovering is that everybody who walks into a kitchen really doesn’t know anything. Every kitchen is a new environment. And the school gave me a sense of history with food."

After culinary school, she worked with Bobby Flay and helped open a vegan tea room before debuting Dirt Candy in October 2008. The restaurant had 18 seats for its first seven years before moving to 86 Allen St. in 2015. Dirt Candy has been called "the future of vegetarian restaurants" by the Village Voice; "the absolute best restaurant on the Lower East Side" by New York Magazine; and "one of America's 100 best restaurants for wine" by Wine Enthusiast.

Chef Cohen has competed on "Iron Chef" and appeared as a guest judge on "Top Chef Canada." She wrote "Dirt Candy: A Cookbook," North America’s first graphic novel cookbook, and was one of the first NYC chefs to eliminate tipping and restructure compensation for her staff. Chef Cohen was nominated for a James Beard Award, Best Chef: NYC, in 2014 and 2018.

Tal Ronnen is the chef at Crossroads in Los Angeles. Known for his vegan cooking, Chef Tal served the first vegan dinner at the U.S. Senate, prepared meals for Oprah's 21-day cleanse, and catered Ellen DeGeneres and Portia de Rossi’s wedding. He graduated from NGI's Chef's Training Program in 2004 and gained experience at Candle 79 in New York City, Madeleine Bistro in LA and Sublime in Fort Lauderdale, Florida.

Chef Tal has published two cookbooks: "Crossroads: Extraordinary Recipes from the Restaurant That Is Reinventing Vegan Cuisine" and "The Conscious Cook: Delicious Meatless Recipes That Will Change the Way You Eat."

Scenes from the Natural Gourmet Center 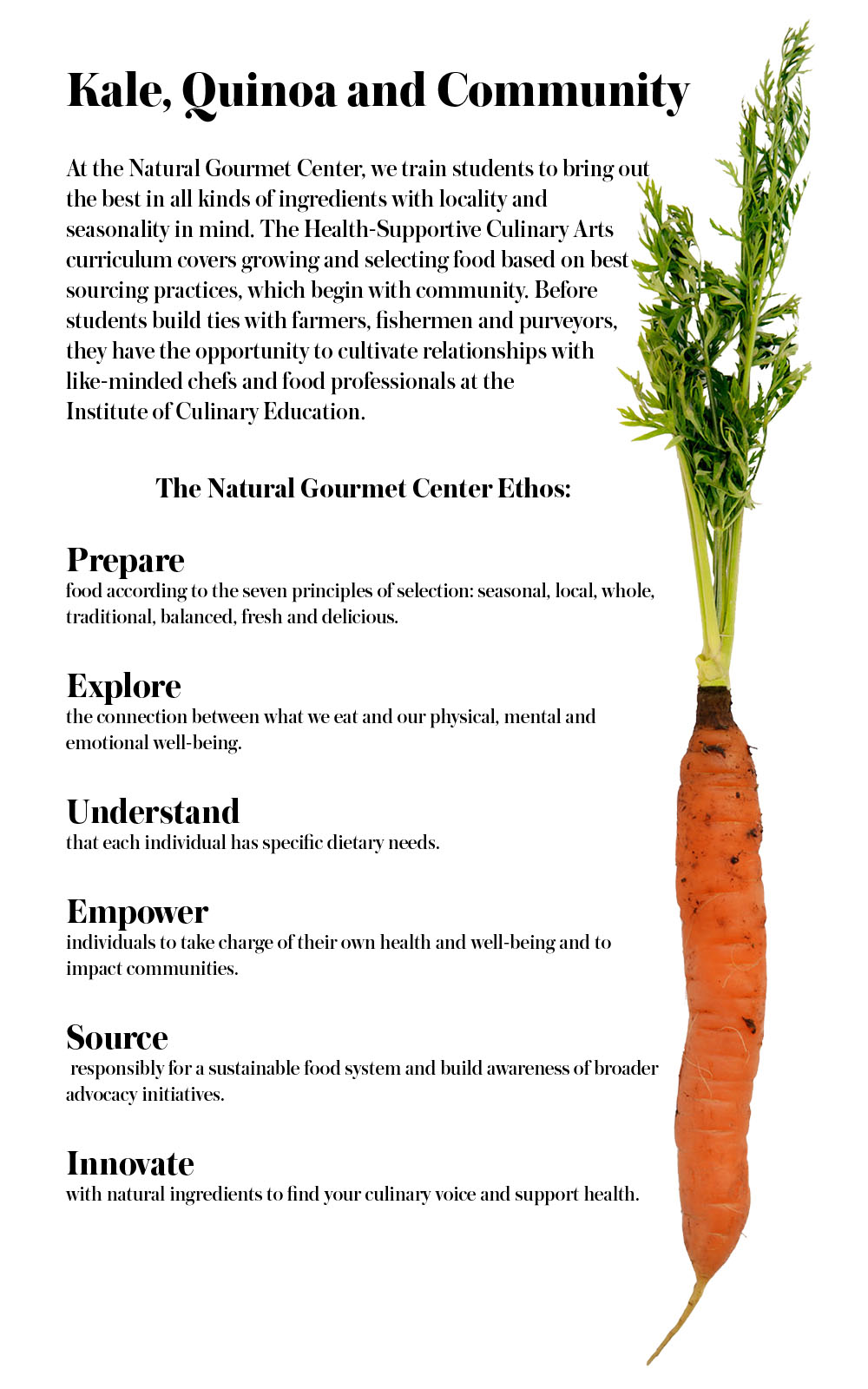 ICE offers enrichment classes focused on cooking and beverage-related aspects of the food industry, free for alumni and students. Experts from all over the world come to ICE to teach, lecture and cook for our students, providing the exclusive opportunity to watch, interact with and ask questions of these successful epicureans. What's more, ICE hosts industry leaders, from California winemakers and New Orleans chefs, to food website founders and specialty food company presidents, as part of our Meet the Culinary Entrepreneurs series.

The founder of Natural Gourmet Institute, Dr. Colbin pioneered the concept and movement of food as medicine in America. She coined health-supportive cuisine and inspired many chefs, dieticians, vegetarians, vegans and plant-based enthusiasts through her lectures and NGI. She taught home cooking to celebrities, such as John Lennon and Mandy Patinkin, and authored or co-authored four books:

ICE Chef Shares How To Bake A Sweet Potato