Included in the grand traditions of Thanksgiving are parades, football and naps (most importantly, naps), but the most consistent thing about the holidays is that every family does it differently.

Just this week, a particularly food-savvy friend and I bonded over the shame we feel for our deep-seeded love of gelatinous canned cranberry sauce and boxed stuffing, both having been served at almost every Thanksgiving meal I can remember. 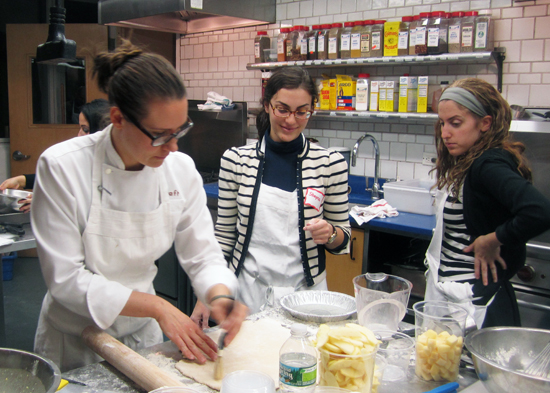 This year, I’m looking forward to something different — nothing but homemade, handcrafted deliciousness at a dinner prepared by the most traditional of country moms. (It’s important to note that this model of domesticity is not my mother, though Mrs. Wheeler can certainly hold her own in a kitchen.) While I’ll be traveling to the wilds of Wyoming for a home-cooked meal, those of you staying in New York have many more options. Many fine-dining establishments around the city set up prix fixe menus.

Pastry Chef Jennifer McCoy of Tom Colicchio’sCraft will be among the many chefs working hard to serve those who are happy to leave the cooking to the pros. Luckily, she also taught a class at ICE on how to make some of her favorite Thanksgiving desserts. Over the four hours we made every dessert that will be gracing the pages of Craft’s Thanksgiving menu this year, including a Comice Pear and Cranberry Crumble that has become my single favorite dessert. While I don’t plan on making every dessert, there was certainly a lot to be learned from Chef McCoy:

The Weight of it All: When making a pie crust there are a couple of tricks to refining a golden crust. For a perfect pumpkin pie, you have to partially bake the crust before filling it. Use a layer of aluminum foil lined with pie weights to help the crust keep its shape. If you don’t have ceramic pie weights, dry beans work just as well.

It’s the Pods, People: While real vanilla extract can be one of the more expensive baking ingredients, it need not be. Every time you use fresh vanilla beans, keep your pods (preferably in the refrigerator) until you have four or five. Just plop them in one cup of vodka and wait for two to four weeks. Then voila — homemade vanilla extract!

Vine to Plate: In most culinary circles, it’s generally accepted that store-bought pumpkin purée is actually superior and more consistent than using a fresh pumpkin. But it’s actually fairly easy to earn the bragging rights that come from turning an unassuming gourd into a delicious dessert. Just break the vine off the top of the pumpkin, then flip it over to insert the tip of the knife into the weakest part of the pumpkin, and cut it in half. From there, just toss it in an pan with a little water, flesh side up, and roast until you can easily scrape the flesh with a spoon. From there just purée the flesh in the food processor.

While the Pear and Cranberry Crumble was my personal favorite, the Cinnamon-Raisin Bread Pudding with Bourbon Caramel Sauce and the Honeycrisp Apple Clafoutis had solid fan-bases as well. So whether you’ve invested valuable time in growing your own pumpkin to make the most personal pumpkin pie possible, or if you’re going the frozen desserts route, have a happy Thanksgiving! Personally, dessert was always my favorite part of the meal.