With the imminent closing of The Four Seasons Restaurant in New York City next month, I have been reflecting on the profound influence this restaurant has had on the North American dining scene and restaurant industry since its opening in 1959. The Four Seasons Restaurant was heralded as the first modern American restaurant (post World War II) to promote North American regional ingredients and seasonally driven menus — a quality that is lauded in today’s food culture. Historically, however, another great New York City restaurant that opened in 1823 was the so-called “Godfather” of this trend — Delmonico’s. 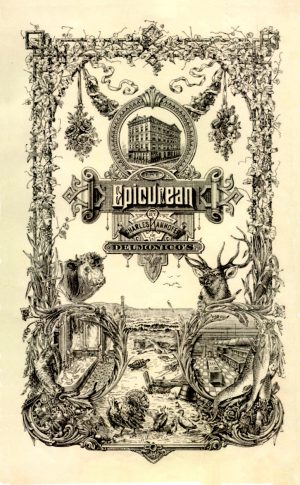 By the middle of the 19th century, Delmonico’s was considered to be the greatest restaurant in the United States. To put it in perspective: the way we think of Thomas Keller’s French Laundry today is the way Americans spoke of Delmonico’s back then. The key date in Delmonico’s history was 1862, when a great French chef from Alsace named Charles Ranhofer took over Delmonico’s kitchen.

His devotion to regional North American ingredients introduced Americans to ingredients that were not commonly served at that time. He used black sea bass from Narragansett Bay in Rhode Island; soft shell blue crabs from the Chesapeake Bay area; shad and its roe from the Hudson River Valley; locally caught sturgeon; alligator pears (that is, avocados from Florida) and samp, a hominy-like dish based on hulled corn kernels from the southwest that Chef Charles served with wild teal duck.

Some of his most iconic preparations, such as Lobster Newburg and Baked Alaska (which he called “Alaska, Florida”) have become staples on many American menus — including some of the earliest menus of The Four Seasons Restaurant.

All of these dishes and thousands more were memorialized in his book "The Epicurean," published in 1894, five years before his passing. Jeremiah Tower, former executive chef of the prominent Berkley, California, restaurant Chez Panisse, speaks quite poignantly in his cookbook, "New American Classics," about how "The Epicurean"inspired him to transform the Chez Panisse menus to reflect Northern California’s indigenous ingredients and produce.

In fact, he mentions that the very first Northern California regional dinner menu he prepared at Chez Panisse in 1973 paid homage to Chef Charles’ influence by adapting Delmonico’s green corn and crayfish soup on that evening’s menu. Looking at the early menus conceived by James Beard and Albert Stöckli, executive chef of The Four Seasons Restaurant, the influence of "The Epicurean"is evident. Hence, no discussion of North American regional cuisine, including the recent farm-to-table and locavore trends in menu concept and execution, is complete without a discussion of the impact of Charles Ranhofer, Delmonico’s and The Epicurean.

If you want to delve deeper into cookbooks inspired by The Epicurean, here are some recommended reads: "The Four Seasons Cookbook" (1971 ed.) by James Beard and Charlotte Adams, "The Four Seasons: The Ultimate Book of Food, Wine and Elegant Dining" (1980) by Tom Margittai and Paul Kovi, "The Four Seasons Spa Cuisine" (1986) by Seppi Renggli, and "New American Classics" (1987) by Jeremiah Tower.