Last week, restaurateur Drew Nieporent, founder of the Myriad Restaurant Group, offered a generous dose of advice to ICE students. As he led students through the development of his career as an entrepreneur—built on the success of long-running restaurants like Montrachet, Nobu, and Tribeca Grill—he recounted a world of rents and entry costs that sounded more fantastical than historical in today's competitive market. 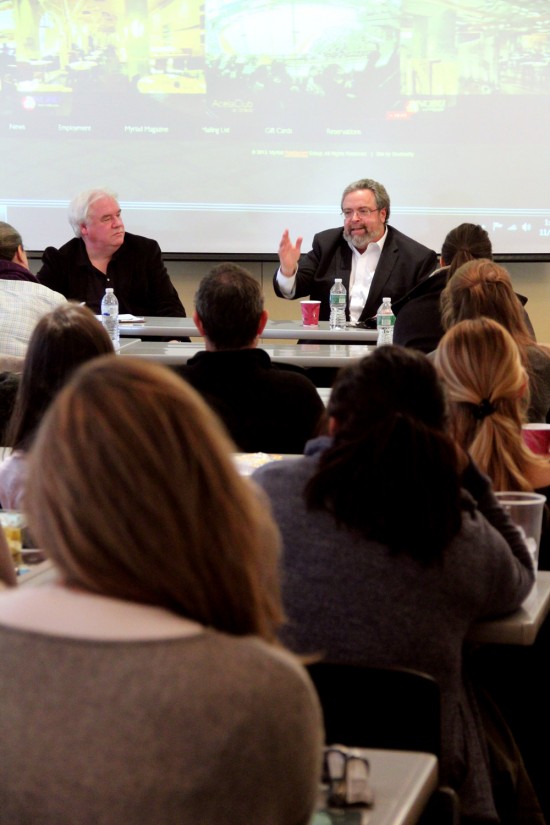 In 1985, he opened the door of Montrachet in Tribeca on a $150,000 investment with a monthly rent of $1,500. The restaurant rose to critical acclaim under the helm of such noteworthy chefs as Brian Whitmer, Debra Ponzek, and current ICE Chef-Instructor Chris Gesualdi. For more than 20 years, Montrachet was one of the city's most beloved eateries—an epic run in New York City years.

In classic a colorful, yet efficient story-telling style, Nieporent outlined the principles that attributed to his success, validating many of the conceptual underpinnings of the Culinary Management program. In particular, he emphasized the importance of real-world restaurant experience as a means to gain confidence as a manager. He also pointed out that, in order for a restaurateur to find the right niche, he/she must be able to recognize his/her strengths and interests, as well as the "fit" of potential employees within that niche.

Despite his relationships with a number of celebrated chefs, Mr. Nieporent also made it abundantly clear that restaurants are businesses first and foremost. Financial stability facilitates creativity, rather than the other way around. And when it comes to enduring success, attention to detail is also a crucial point. To demonstrate this concept, Nieporent provided a comic recount of his clever efforts to identify New York Times dining critic Bryan Miller. (In short, he discovered the critic went by Mr. Benson at another New York restaurant, and when he first opened Montrachet, ensured that anyone named Benson received exceptional service. The plan paid off, yielding 3-star results.)

He also cautioned students against "trying too hard" (a veritable epidemic in today's restaurant world), pointing out that many presently popular operations are running on transient, trendy appeal, as opposed to solid restaurant fundamentals. His prediction: these establishments won't be around in a year or two.

Nieporent's final point was simple, yet often overlooked: food isn't always enough. Differentiation, accessibility and consistent execution provide the glue that holds good operations together and keep customers coming back. Thirty years ago, at Montrachet, he offered great food in a casual, yet elegant downtown establishment for less than half the price of haute cuisine counterparts in Midtown.

Today, looking at the number of restaurants serving exceptional food without the fancy white tablecloths, it's clear that Mr. Nieporent has always been a forward thinker.   As for the growth of Nobu and the Myriad group, Nieporent failed to mention that famous and wealthy partners can certainly improve a restaurant's chances of success. Then again, he didn't have to—riding on others' reputations was not the root of his success. The rich and famous investors only followed his lead after the initial success of Montrachet; smart money bets on a winning formula.