Back of the House: An Interview with Chef Paul Liebrandt

Last month, ICE students had the unique opportunity to hear Chef Paul Liebrandt speak in an intimate interview with Scott Haas, author of Back of the House: The Secret Life of a Restaurant.

At age 36, Liebrandt—described this week in the New York Times as an "upapologetic artist"—is remarkably young to be considered among the world's top chefs. Yet if he has no regrets, it's not for a lack of living. In person, Liebrandt's maturity far surpasses his physical youth, speaking of his profession with the clarity of a chef far his senior. 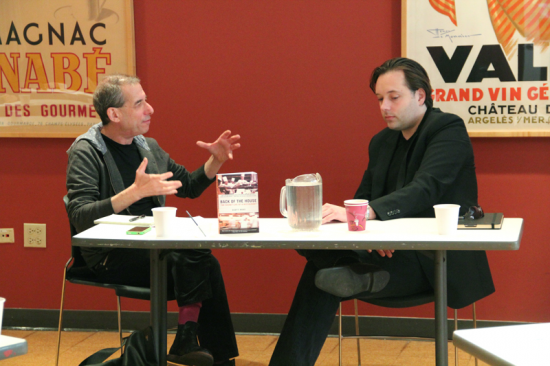 As co-owner and Executive Chef of Corton in New York City, Liebrandt runs a tight ship. His father was in the special forces, a level of military training that required not only the utmost physical fitness, but also psychological endurance, as missions were often to be carried out with little information beyond the most essential instructions. It's easy to draw parallels between this training and the fast-paced precision required in Liebrandt's kitchen—though he'll be the first to admit that this is not life and death; it's cooking.

In his small kitchen, Liebrandt sets the tone, but his chefs have to think for themselves and operate well under pressure. Placing responsibility and respect squarely in their hands, he requires them not only to cook, but also to fill out the orders for the products they will need the following day. The stakes are high, but that doesn't mean Liebrandt's kitchen is an unpleasant place to work. He dismisses the stereotype of the dictatorial, hot-headed Executive Chef, opting for a policy of dispassionate honesty. "I can show you the door, but you have to go through it. It's about being honest—not coddling or berating [staff]. The ones who last are the ones who can think about they're doing rather than [just] follow orders. I want proactive, not reactive."

This level-headed demeanor aligns with Liebrandt's perspective on cooking: "It takes perseverance, experience, patience." Unlike some other renown chefs shaping the industry, Liebrandt's career started very traditionally, working his way up the ranks. "[It's essential to] learn your craft. Today, everybody wants everything instantly, but it's a marathon, not 100 meters."

As far as a personal turning point, he names his experiences cooking France, where he became fully immersed in the ingredients and the craft. That said, he is hesitant to label his cuisine as "French", given the wealth of products and techniques at his disposal. Regional food cultures have grown out of genuine traditions, but the idea of national cuisine is a modern invention. "At the end of the day, you the customer are eating it...It's either good or it's bad."

As far as his creative approach, Liebrandt explains that, earlier on, it was mostly about travel, culture and learning. Today, however, he is involved in a more "graphic" perspective, in which each dish appears simple, but has many layers. His defines his ongoing interest and motivation in in the restaurant industry as "the chance to get it right." Even with the best ingredients and brigade, it still comes down to the person cooking, and Liebrandt is committed to surpassing his last performance, each time he approaches the stove.

As suggested by his somewhat stoic demeanor, Liebrandt's ascent to the height of fine dining has been a combination of ambition and hard work. When asked the advice he would give himself at the onset of his career, he responded, "Don't be so naive." Ironically, he acknowledges that his ignorance to the grueling work ethic of top chefs has actually been an asset in his career. If he had known how difficult the work would have been, he might have become a carpenter or a painter. Moreover, he continued, the restaurant business has changed dramatically over the past 20 years, with an increased emphasis on the business, moreso than the cooking.

It's this awareness of the business, as well as the the ability to imagine the full experience of dining (wine pairings, etc.), that Liebrandt defines as the difference between a Chef and a cook. As far as the industry trends that make him hopeful for the future, Liebrandt says, "I see a lot of people getting back to basics and not chasing fame. That's what I hope will continue." As for the Chef's next venture, The Elm, he plans to re-imagine classic dishes. We're eager to see the influence of that his "back-to-basics" approach will have on the city's culinary scene.