As chefs, cake decorators, specialty food purveyors and caterers, ICE graduates are achieving goals in a plethora of avenues in the food world. Check out just some of the alumni finding success and making recent headlines. 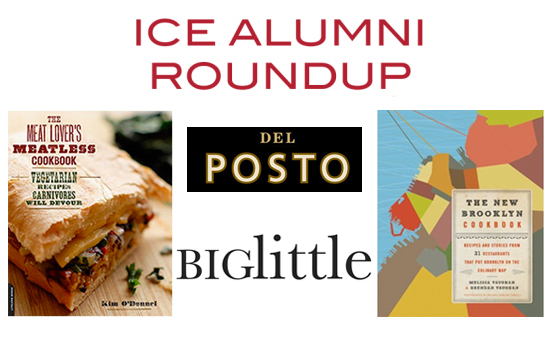 Melissa Vaughan (Culinary, ’01) and her husband Brendan wrote "The New Brooklyn Cookbook." The couple and some of their recipes were highlighted in the Daily News.

Kim O’Donnel (Culinary, ’97) launched her new book, "The Meat Lover’s Meatless Cookbook," which was featured on The Washington Post, Serious Eats and The Huffington Post.

Flannery Klette-Kolton (Culinary, ’08/Management, ’08) was included in an episode of "My Life in Food" on the Cooking Channel. The show included her personal chef company, bigLITTLE, and its unique supper club dinners.

Wine director at Del Posto, Henry Davar (Culinary, ’02) was part of the team that helped the restaurant earn its four-star review in The New York Times.

Ashton Warren (Pastry, ’08) was featured in The New York Times’ two-star review of Marc Forgione for her “banana split sundae” and role as pastry chef.

Annemarie Ahearn (Culinary/Management, ’05), proprietor of Salt Water Farm, a farm-to-table cooking school on the coast of Maine, was included in the November issue of Food & Wine in the “40 Big Food Thinkers Under 40” story.